Get More Smarter on Tuesday (September 11)

Has it really been 17 years? It’s time to Get More Smarter. If you think we missed something important, please include the link in the comments below (here’s a good example). If you are more of a visual learner, check out The Get More Smarter Show.

► President Trump’s approval ratings are plummeting by just about every measure, as CNN reports:

…Eight high-quality polls have been completed over the two last weeks — and every single one of them has Trump’s approval falling.

If we just took an average of the last polls by these organizations completed August 27 or earlier, Trump’s approval rating stood at 41%.

Perhaps not coincidentally, Bob Woodward’s “Fear,” his much-hyped book about the dysfunctional Trump administration, is available today. As Greg Sargent writes for the Washington Post, there are plenty of disturbing new revelations in the book beyond what was leaked last week.

► Colorado Attorney General Cynthia Coffman is getting a lot of positive press for her decision to join other states in suing pharmaceutical giant Purdue Pharma over its deceptive marketing related to the highly-addictive painkiller Oxycontin. Coffman is finishing up her term in office this year, but her decision is becoming a serious political liability for Republican AG candidate George Brauchler. David Williams has more for Real Vail.

Speaking of Brauchler, the Arapahoe County District Attorney absolutely BOMBED in a weekend debate sponsored by Club 20. Brauchler’s non-answer on a question about Roe v. Wade led to boos from a conservative leaning audience.

► Colorado Sen. Michael Bennet (D-Denver) says he will not support Supreme Court nominee Brett Kavanaugh, which means he takes a similar view to many Americans. According to a CNN poll, Americans are not enthusiastic about Kavanaugh: 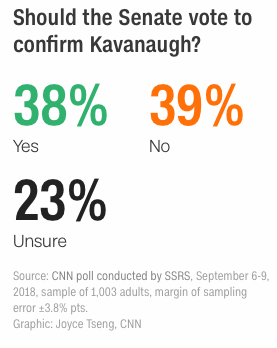 ► As CNN’s Chris Cillizza explains, President Trump apparently had other things (besides 9/11) on his mind this morning:

On the 17th anniversary of the deadliest act of domestic terrorism in American history and with a monster hurricane bearing down on the East Coast, the President of the United States woke up on Tuesday morning and tweeted this:

“‘We have found nothing to show collusion between President Trump & Russia, absolutely zero, but every day we get more documentation showing collusion between the FBI & DOJ, the Hillary campaign, foreign spies & Russians, incredible.’ @SaraCarterDC @LouDobbs”…

…Trump defenders will insist that all Tuesday morning’s Twitter activity reveals is that the President can focus on a bunch of different things at once. He can attack his own Justice Department while also remembering 9/11 — albeit in his own very unique way. And of course he is keeping his eye on Florence — even if he isn’t tweeting about it.

Maybe so. But to start a day like today — with the emotional significance of the 9/11 anniversary and the very real urgency of a major East Coast hurricane — by banging the same drum about “NO COLLUSION” and how the Justice Department has its priorities all screwed up speaks to a tin ear for the moment and an inability to focus on what matters to the country as opposed to what matters to you personally.

Ladies and gentlemen, the President of the United States of America. Still.

► Where your steak comes with a side of racism, or vice versa.

► Congressional Republicans can’t seem to agree on what to do about funding the federal government, as Politico reports:

The outstanding differences are so great that leaders have all but decided to sideline one of their original three “minibus” spending packages. The new plan includes passing the remaining two and simply extending funding for the rest of the half-dozen or so departments until early December in a so-called continuing resolution, according to three sources with knowledge of the plan. Senate leaders are still hoping they can finish work on the package and pressure the House to take it up.

Leaders also haven’t ruled out extending the farm bill deadline to give themselves more negotiating time, though Republicans in both chambers say they hope they can avoid that. And tensions between the two chambers have simmered below the surface, as Senate and House Republicans blame each other for their slowed progress.

► As NBC News reports, Russia is suspected of being involved in a series of strange attacks on American diplomats that have caused several brain injuries.

► Election officials in Georgia might need to call a do-over after a mistake on a Primary ballot led to the defeat of an incumbent lawmaker.

► Pro-fracking groups in Colorado are being accused of trying to scam voters with copycat campaign schemes, as the Aurora Sentinel reports.

► According to AAA Colorado, gas prices will be on the decline this fall.

► As John Frank writes for the Colorado Sun, Republicans who are looking for gubernatorial candidate Walker Stapleton to be more like Donald Trump probably aren’t doing the GOP any favors.

► Lookie here: A story about campaign finance disclosures that DOESN’T end with a closed book.

► The Trump surrogates who applaud the President in interviews may very well be contractually-obligated to praise the Big Orange Guy.

► The White House had to walk back a Monday Tweet from President Trump about the economy that wasn’t really even close to being correct.

► Is it a big deal that New York gubernatorial candidate Cynthia Nixon puts lox on a cinnamon raisin bagel? No, it is not. But it is still really gross.