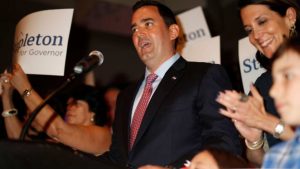 Colorado’s Republican candidate for governor won’t say if he’d sign legislation making abortions illegal or harder to get in Colorado.

“I’m not going to get into a bunch of hypotheticals on a particular piece of legislation. Roe v. Wade is the law of the land. We’ll see what happens in future,” Walker Stapleton told CBS4 political specialist Shaun Boyd last week.

But Boyd’s hypothetical question isn’t so hypothetical now, with the U.S. Senate poised to add Trump’s conservative nominee to the U.S. Supreme Court, paving the way for the gutting Roe v. Wade, which protects abortion rights in America.

In the absence of Roe, state governments would be free not only to pass laws outlawing abortion outright but also to put roadblocks in place to restrict access to abortion.

Such legislation didn’t land on Democratic Gov. John Hickenlooper’s desk, but here are three examples of bills that were promoted by anti-choice Republicans in the Colorado legislature just this year:

This legislation would have stopped the use of a method of abortion used for 95 percent abortions performed during the second trimester.

Those bills aren’t hypothetical, but would Stapleton sign them if they landed on his desk?

He won’t say, but Stapleton told Boyd he’s a pro-life Republican, who believes that life begins at conception. Such a belief would align him with anti-abortion activists who oppose some forms of birth control, which could potentially destroy fertilized eggs, or zygotes. But Stapleton told Boyd his anti-abortion stance includes exceptions for rape, incest, and to save a mother’s life.

During a speech to state Republicans in April, Stapleton vowed to protect the “born and unborn.” He’s said he’ll be a pro-life governor.

Stapleton’s Democratic opponent, U.S. Rep. Jared Polis, is pro-choice, saying that he would not ban any abortion, even late abortions, because “this is a very personal decision for a woman.”

“It’s between her conscience, her god and her doctor… in no way, shape or form should it be the government’s decision to tell a woman what to do with her own body,” Polis told Boyd.

“This is a more real threat than ever before,” Polis told a group at Planned Parenthood, according to CBS4.