(Loves him some – Promoted by Colorado Pols) 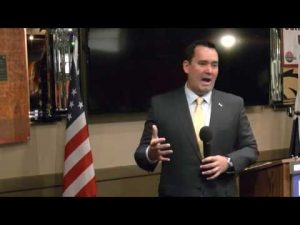 Over the weekend, the Associated Press quoted a top Republican congressional aid as saying that the “great danger” in the November election is an “enthusiasm gap,” and there is “nobody who can close the enthusiasm gap quite like the president.”

Here in Colorado, political analysts agree that Republican candidate for governor Walker Stapleton needs to somehow find a way to make his GOP base enthusiastic about his campaign–which could explain why Stapleton enthusiastically told a radio host again last week that he’d like to campaign with Trump here in Colorado. He said the same thing in June.

“Nothing has changed,” said Stapleton about his desire to campaign with Trump, “except that — you know, the Washington media scene is ugly.”

But it appears Stapleton won’t be seeing the president here.

Trump’s advisers have devised a strategy to send Trump to campaign “where he can be helpful,” according to the AP, and Colorado apparently isn’t on the list, while Texas is.

In response, Stapleton seems to be trying to whip up GOP enthusiasm by expressing hope that the president comes to Colorado anyway–and by praising Trump, particularly when Stapleton is addressing conservative audiences.

Stapleton said Trump has kept America safe in an “admirable way,”  and there’s “no change” in his desire to campaign with Trump in Colorado, as you can hear in his interview on conservative radio last week (Listen here at 27 min 30 sec.).

Stapleton also told KNUS radio host Steffan Tubbs that he backed Trump’s new tax law and, “I’ve been a supporter of the President’s economic policies and his immigration policies, as far as sanctuary cities are concerned because those are issues that directly either benefit or impact Colorado.”

Addressing whether he thought Trump would come to Colorodo, Stapleton said, “The President also has a busy schedule. He is foremost concerned with Congress, and making sure that Republicans hold Congress. And he constantly, you know, has to wear a suit of armor around D.C.. So, we’ll see what the future holds.”

Democratic President Barack Obama visited Colorado in the 2014 midterm election in support of Gov. John Hickenlooper, who was seeking re-election. Among other things, the pair played pool.