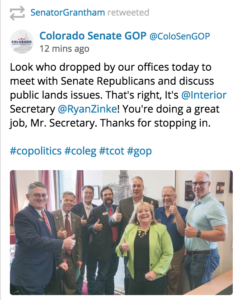 The politics of yucking it up with top Trump officials are dicey for Colorado Republicans these days, as the president enjoys low approval ratings here.

Republicans must win the governor’s office or retain control of the state senate, in which they have a slim one-seat advantage, to stop Colorado Democrats from gaining complete control of Colorado state government.

The Republican candidate for governor, Walker Stapleton, has invited Trump to campaign with him in Colorado in his race against U.S. Rep. Jared Polis (D-CO).

State senate Republicans haven’t extended an invitation to Trump directly, but embracing Zinke would appear to signal that they are not scared of cozying up to Trump.

Zinke, formerly a businessman, has reportedly welcomed meetings with right-wing activists who advocate transferring management of federal lands to the states.

Since his appointment to lead the Interior Department, he’s been heavily criticized by scientists, American Indian tribes, ethicists, and others.

He’s been investigated for billing taxpayers for the use of private jets, reportedly flown to meetings with political donors. Zinke has denied the allegations.

Zinke was in Colorado to tout his effort to boost maintenance of national parks.

“Our parks, as many of you may know, are $11.7 billion behind in infrastructure, most of that roads,” Zinke told the Ft. Collins Coloradoan. “It’s not a Republican or a Democrat issue, it’s an American issue.”