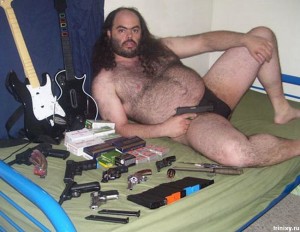 A man who loves his guns.

Elizabeth Hernandez of the Denver Post reports on a disturbing development with a smell anyone who has followed the fraught debate over gun safety in Colorado since the historic 2013 session of the state legislature will recognize:

The Converse sneakers extended onto the coffee table and the friendship bracelets bedazzling the arms of the teenage girls on Tuesday night didn’t make the tone of the meeting any less serious — Colorado’s student activists were concerned about a social media threat connected to a protest they were planning against the NRA and Rocky Mountain Gun Owners on Saturday.

By Wednesday night, key organizers said the threats were too much and they planned to withdraw from the protest…

Dudley Brown, a gun lobbyist and founder and executive director of the Rocky Mountain Gun Owners, said his group doesn’t plan a counter-protest, but that he understands why the group would receive threats.

“Do I believe people should act violently?” Brown asked. “No, of course not. When you make controversial statements on politics, crazies come out and send you things. I don’t agree with it, but I understand it.”

Back in 2013, when the Colorado General Assembly passed landmark legislation to tighten gun background checks and limit magazine capacity, Democratic lawmakers who supported those bills were subjected to an intense barrage of violent threats for gun rights supporters. In one particularly egregious case, Franklin Sain of Colorado Springs, the targeted legislator obtained a permanent restraining order before asking the filed charges to be dropped. Many other cases couldn’t be conclusively identified, but these were extremely and unambiguously threatening messages to lawmakers that most certainly justified investigation.

After the shooting at a high school in Parkland, Florida earlier this year resulted in a group of students from that school becoming highly visible advocates for taking action to reduce gun violence, some of those students have been similarly subjected to very adult threats to their safety. One student David Hogg, was the victim of a “SWATing” incident in which heavily armed police were dispatched to his home on a false report.

Clearly there is not unanimity on the issue, although public polls consistently show much more support for gun control that politicians on either side are willing to act on. With that said, if your views on this issue either way are so overpoweringly strident that you feel justified threatening to hurt kids, you have just crossed over into the segment of the population who should not own guns.

Meaning you’ve just proven the point you wanted to refute.