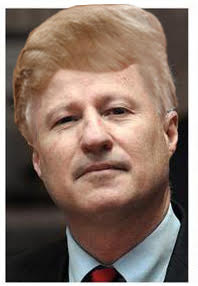 Head by Coffman, hair by Trump

President Trump’s re-election campaign is diverting serious cash to 100 Republican candidates for U.S. Senate and House in an effort to stave off a growing Blue Wave.

As McClatchy DC reports, Trump’s campaign cash is even going to Republican candidates who have been critical of the President in words (although loyal in their voting records) — candidates like Rep. Mike Coffman (R-Aurora):

The Trump campaign announced last week that it would donate the maximum amount allowed by law — $2,000 per candidate — to 100 Republicans running for Congress in November, perhaps a sign that the GOP is worried it will lose its majorities in Congress. Democrats need to pick up a net of 23 seats in the House and two in the Senate to gain control of the chambers.

The Trump campaign did not disclose which candidates would receive contributions and did not respond to subsequent questions about how the candidates were selected, but McClatchy obtained a detailed list…

…None of the half-dozen campaigns contacted by McClatchy said they were aware of the donations. Some declined to comment while others, including Rep. Mario Diaz-Balart, who supported the immigration proposal opposed by Trump, did not immediately respond to a message. 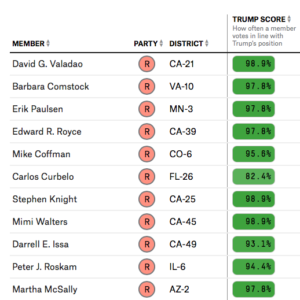 Congressman Scott Tipton (R-Cortez) is the only other member of Colorado’s delegation receiving financial support from the Trump campaign. Tipton has generally shied away from criticizing Trump, so his inclusion on this list is less of a surprise at first glance. But when you look closer at the data, it shows that Rep. Coffman has turned out to be among the most Trumpian members of Congress in the last 18 months. As 538.com’s Trump Tracker shows, Coffman has voted with Trump’s position 95.6% of the time, placing him fifth among all House members in Congress.

While he has been busy supporting Trump at every turn in Congress, Coffman has tried to maintain some distance with the President in the context of his re-election campaign. Back in 2016, Coffman aired the first “stand up to Trump” television ad from an incumbent Republican Congressman, but after Trump won the Presidency, he quickly came around with a MAGA hat of his own.

Coffman has always rode the fence on virtually every issue, and he’s taking the same approach with his on-again, off-again dalliance with Trump. It might just come back to bite him in the butt in November.