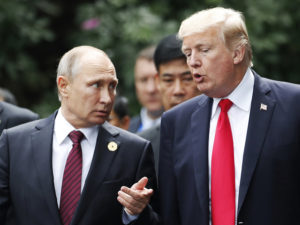 President Trump on Wednesday responded to questions from reporters about his disastrous Helsinki summit with Russian President Vladimir Putin — a response that has the White House scrambling to explain what the Big Orange Guy really meant to say.

At a White House press briefing, Sarah Huckabee Sanders said that President Trump was saying “no” earlier Wednesday to whether he would take further questions from reporters.

“The president said, ‘Thank you very much,’ and was saying ‘no’ to answering questions,” Sanders said. “The president and his administration are working very hard to make sure that Russia is unable to meddle as they have done in the past.”

Earlier Wednesday, Trump said, “Thank you very much, no,” in response to a question from a reporter about whether Russia is still targeting the United States. He also asserted no president has been tougher on Russia than him.

At least you’re not the White House Press Secretary.