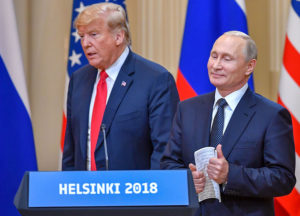 Reading prepared remarks to reporters at the White House, Trump reiterated that there was no collusion between his campaign and Russia and that the country’s efforts had no impact on the final results.

He said that when he returned from the summit with Putin in Helsinki, Finland, he “realized there is some need for clarification” about his remarks on Russian interference in the 2016 election.

“In a key sentence in my remarks I said the word ‘would’ instead of ‘wouldn’t,'” Trump said. He explained he reviewed a transcript and video of his remarks.

“The sentence should have been: ‘I don’t see any reason why it wouldn’t be Russia,'” he said. “Sort of a double negative.”

“I think that probably clarifies things pretty good on itself,” Trump said.