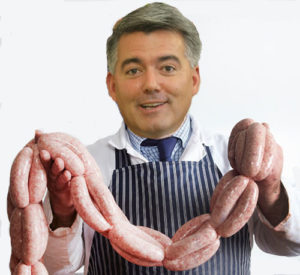 Last week Politico Magazine outlined the strange case of a “mystery” organization that received millions of dollars from the National Rifle Association (NRA) to produce a plethora of advertisements promoting Republican candidates for U.S. Senate in 2014. Colorado Sen. Cory Gardner (R-Yuma) was one of the primary beneficiaries of this spending, though his campaign’s involvement with the entire process reeks of illegal coordination.

To get its message out, the NRA turned to an unknown consulting firm, Starboard Strategic, paying it $19 million. More than a third of that money was invested in must-win Senate seats in Colorado, North Carolina and Arkansas — three of the most expensive in the country — paying for a host of television, radio and internet ads…

…Acquiring business of this magnitude would be an incredible feat for a firm with no reputation. The question is whether it was really accomplished by Starboard, or another outfit called OnMessage.

Well-established and well-connected, OnMessage is as transparent as Starboard is opaque. What the Federal Election Commission and the public do not know is that the two entities appear to be functionally one and the same. [Pols emphasis]

“There is substantial evidence that the NRA funneled millions through a shell corporation to unlawfully coordinate with candidates it was backing,” said Brendan Fischer, director, federal reform at CLC. “The NRA using inside information about a candidate’s strategy to create ‘independent’ ads supporting him creates an unfair advantage, and it violates the law. According to the Supreme Court, groups like the NRA can only make unlimited expenditures if they are independent of the candidates they support, and it falls to the FEC to enforce the laws that preserve that independence and prevent corruption.” 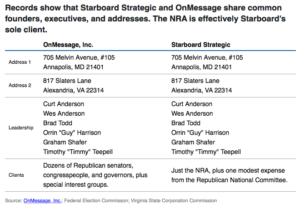 As you can see from the graphic at right, OnMessage and Starboard Strategic are essentially the same company, which is a problem when you finish connect the dots on this sordid affair. Let’s go back to Politico Magazine:

In 2014, among OnMessage’s most prominent clients were three Republican challengers vying for Senate seats in the same races where the NRA would pay Starboard some of its biggest outlays of the cycle: Thom Tillis, in North Carolina; Cory Gardner, in Colorado; and Tom Cotton, in Arkansas. All of these candidates would defeat Democratic incumbents, cementing the result for which GOP leaders and the NRA had mobilized: a Republican majority in the upper chamber to match the one in the House. Each challenger paid OnMessage $5 million to $8 million, far more than they paid any other vendors.

Campaign-finance rules prohibit coordination between official campaigns and outside groups, such as the NRA, who support the same candidate. Those restrictions, in turn, give force to a fundamental law governing political spending. Outside groups can independently disburse unlimited sums to influence elections. But they can give no more than $5,000 when giving directly to a candidate…

…Two former FEC chairs, one Republican and the other Democrat, reviewed the findings of Politico Magazine and The Trace, and said they found them troubling. “This evidence raises substantial questions about whether OnMessage and Starboard Strategic were used as conduits for coordination between the NRA and the candidates it was supporting,” Trevor Potter, the Republican, said. “It’s pretty serious,” added Ann Ravel, the Democrat. “It doesn’t seem right.” Both former chairs independently came to the same conclusion: “The FEC should investigate.“