Walker Stapleton wants Coloradans to know that he totally, totally chose a running mate for his upcoming GOP run for the governor’s seat in November. And that, for the reals, Colorado, he met the legal deadline to do so last week. And he pinkie-swears he’s not lying. Cross his Trump-loving heart. 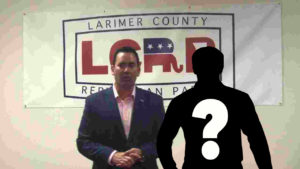 We wanted to briefly circle back to recap last week’s principal story in Colorado politics, the failure of Republican gubernatorial nominee Walker Stapleton to announce his running mate within the seven days nominally prescribed by law. Stapleton, breaking with precedent that has held ever since candidates for governor were given the power to choose their own running mates, claims that a loophole in the law allows him to keep his selection secret for up to 30 days–during which time the candidate is essentially on their honor that they made the pick within the seven-day deadline.

The excuses offered by Stapleton’s campaign for not announcing their running mate by the deadline have evolved considerably as it became apparent that the delay wasn’t going over well. Ernest Luning in the Colorado Springs Gazette:

“I don’t think it makes sense to announce over the Fourth of July week unless you are in a hurry to try to change the narrative, which, after last week, Jared undoubtedly is,” Michael Fortney said, referring to U.S. Rep. Jared Polis, the Democratic gubernatorial nominee.

“He couldn’t unite the party, so he rushed to make his lieutenant governor announcement in hopes she could do what he couldn’t. I am skeptical. Or he didn’t read the entire law. Either way, not a good look.”

Under scrutiny from Charles Ashby at the Grand Junction Sentinel, this got stupid pretty quickly:

[A]ccording to state statutes — and the Polis campaign — the law requires governor candidates to make such a nomination within seven days after the primary. After Stapleton campaign manager Michael Fortney made that “rushed” comment Monday, he told The Daily Sentinel on Tuesday that Stapleton did pick a running mate the same day, [Pols emphasis] but won’t announce who that person is for a few weeks.

“You have to read the rest of that statute,” Fortney said. “We have 30 days to make that announcement.”

Both picked running mates last Monday, but Polis’ choice was “rushed” because he’s not keeping it secret? Is there another way to read this? The fact that no one has interpreted the law this way in the almost 20 years it’s been on the books makes it absurd to suggest that the Polis campaign’s announcement the day before the deadline was “rushed.” Stapleton’s campaign didn’t have to make that charge, but in the end their own failure to announce a running mate by the deadline was obviously the bigger story and the attempt had backfired. Reporters just didn’t buy the bull:

Stapleton campaign manager Michael Fortney accused the Polis camp of choosing his running mate within a week of the primary, as the law requires, [Pols emphasis] to divert attention from that unity rally, saying it was meant to “change the dialogue.”

With that line of attack floundering, it was back to the holiday week as the excuse for what everyone by this point was forced to agree was Stapleton’s unusual move, not Polis’:

Instead of unveiling Stapleton’s pick when voters are paying more attention to fireworks, barbecues and summer road trips, Fortney said, the campaign intends to let its lieutenant governor candidate be known on its own schedule, sometime before July 26 — potentially getting a bump in good publicity from the announcement instead of squandering it.

At this point, the negative press over Stapleton’s failure to announce by the deadline has done far more damage than announcing last week would have cost him in terms of voter attention. Stapleton’s decision to “keep the choice secret,” with no evident way to prove that the selection was made within the seven days required by law, make the question of whether Stapleton has a running mate even today quite pressing–especially given the credible rumors that Stapleton’s first choice for the job, CU Regent Heidi Ganahl, declined to run with him.

In the best case, Stapleton has reinforced his solidifying reputation as a bumbling idiot and the damage is done–unless it becomes clear that Stapleton didn’t have his running mate by the deadline, and has been making excuses and pointing fingers hypocritically ever since.

In that event, yes. This could get even worse.