Republicans Do Nothing as Children Pulled from Families

UPDATE: As NBC News reports, it’s getting increasingly difficult for the White House — and Congressional Republicans — to deflect blame for this crisis:

The idea of separating migrant children from their mothers was discussed during the earliest days of the Trump administration as a way to deter asylum-seekers, according to notes from a closed-door DHS meeting. 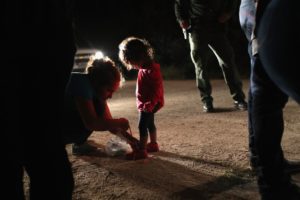 The Trump administration’s “zero tolerance” policy on immigration has led to thousands of children being forcibly separated from their families at the U.S.-Mexico border. Every single Democrat in the U.S. Senate has now signed onto The Keep Families Together Act, which is intended to put a stop to this horrific policy. While many Republicans have spoken out against the practice of forcible separation, they aren’t taking any real action to force a change.

As Politico explains, this could be a telling moment ahead of the 2018 election:

Even as the White House blames Congress for the crisis at the border,GOP lawmakers are struggling to craft a proposal that unites their own party, let alone one that can win bipartisan support and become law. And with no congressional solution in sight, Hill Republicans worry that Trump’s immigration crackdown could swamp their success on the economy and overshadow all the things they want to run on in the midterm elections…

…And the renewed focus on immigration is almost all self-inflicted, from Trump’s decision to end the Obama-era Deferred Action for Childhood Arrivals program to his relentless focus on the border wall to his “zero tolerance” policy for border-crossers, which has already led to more than 2,300 children separated from their parents.

But the decision by the administration to separate children from their parents has elevated the issue to one now consuming national politics. Hugh Hewitt, a leading conservative media voice, raised the prospect that the family separation crisis could become “the Republicans’ new Katrina and the president’s new Katrina” in an interview with Sen. Pat Toomey (R-Pa.) on Monday.

“The White House can fix it if they want to.”

Understanding why Congressional Republicans refuse to act on this growing humanitarian crisis is depressingly obvious. The results of three new polls are telling.

Polling data released in the last 24 hours by Quinnipiac University, Ipsos, and SSRS all show that the general public disagrees strongly with forcible separations. All three polls also show Republican support for these actions.

According to Quinnipiac, 66% of voters — including 91% of Democrats and 68% of Independents — oppose the Trump immigration policy, but 55% of Republicans support the “zero tolerance” decision:

According to Ipsos, 55% of respondents overall disagreed with the “zero tolerance” approach, with 46% of Republicans expressing support. Finally, a CNN/SSRS poll finds that 67% of Americans disapprove of the Trump immigration policies, while a majority of Republicans stand in support.

Perhaps it should come as no surprise, then, when Republicans like Rep. Ken Buck (R-Greeley) blame the parents of undocumented immigrants for being separated from their children. Some Republicans, such as Sen. Cory Gardner (R-Yuma), don’t go as far as Buck but won’t do anything beyond issuing statements:

Our immigration system is broken & the separation of children at our southern border shows just how critical it is that Congress pass immigration reform immediately. Children should not be penalized for the actions of their parents, & that’s exactly what is happening right now.

Senator Gardner thinks that Congress should do something. Democrats are doing something. It’s Republicans who are sitting on their hands.

The larger issue for Sasse and for other Republicans who have from time to time taken issue with the president is their abject refusal to translate rhetoric into action. [Pols emphasis] In legislation, in oversight and in the confirmation process, they routinely shrink from confrontation with the White House or their own leadership. Republicans do, after all, have the majorities in both houses and long ago could have voted to end child separation. They could, at any time, cease confirming judges or even refuse to go forward on any business until the wicked policy is ended.

Sasse, a former university president who holds a PhD in history from Yale, surely is familiar with the admonition, “The only thing necessary for the triumph of evil  [or wicked, in his telling] is for good men to do nothing.” Speaking, posting and tweeting don’t count as “doing.” Unless Sasse starts doing, he is enabling.

Republican elected officials do nothing because they are paralyzed in fear of their right-wing base and President Trump. As we’ve said many times in this space, refusing to take action is a choice in itself.