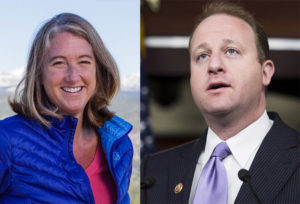 Ernest Luning of the former Colorado Statesman reports on a new poll from Strategies 360 on behalf of the Service Employees International Union’s small-donor committee–showing Jared Polis cruising to victory in the Democratic gubernatorial primary, but both Polis and principal Democratic challenger Cary Kennedy both ahead of Republican presumed frontrunner Walker Stapleton:

Jared Polis holds a lead over Cary Kennedy atop the four-way Democratic primary to be Colorado’s next governor, but both would defeat Republican frontrunner Walker Stapleton by the same margin, according to a new survey…

The poll of likely Democratic primary voters and likely general election voters also shows that nearly half of respondents consider themselves to be either just getting by or struggling economically — despite the state’s booming economy — and a good share of them haven’t decided how to vote for governor, either in this month’s primary or the November election.

Those voters, the pollsters added, appear to be receptive to candidates who are up front about supporting workers. 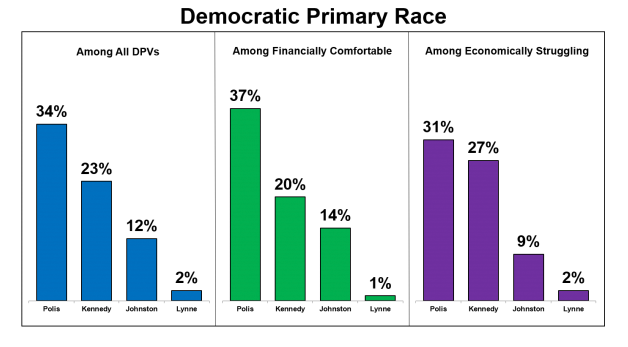 An interesting detail in this poll, obviously germane to the SEIU’s political platform, is the difference in the results between respondents who describe themselves as struggling economically versus those who self-identify as financially comfortable. Among primary voters who are struggling, the race between Polis and Kennedy is substantially tighter with Polis’ lead shrinking to four points. It’s worth noting that the head-to-head matchups against Stapleton are similarly closer among economically struggling voters, which means the question runs deeper than the mere wealth of the candidates.

All told this poll is good news for Polis, good for Democrats in general, and a clear indicator of where the swing votes will be both in the primary election and in November. Colorado’s economy is booming, but not everyone is seeing the benefits. The candidate who succeeds in winning voters who have yet to feel the recovery with a positive vision for their personal futures will have the decisive edge in the race to be the next governor.

Love him or hate him, this is a truth that John Hickenlooper won two terms by never forgetting.