Last week we wrote up one of our world-famous “Debate Diaries” from an appearance by Democratic gubernatorial candidates at the “Colorado Decides” series sponsored by Colorado Public Television, CBS4 Denver, KOA NewsRadio and KUNC.

“Colorado Decides” held its debate with Republican candidates on Wednesday, and State Treasurer Walker Stapleton was nowhere to be found. Host Dominic Dezzutti was not at all amused, as you can see at the beginning of this clip of highlights posted online by the campaign of Mitt Romney’s Nephew: 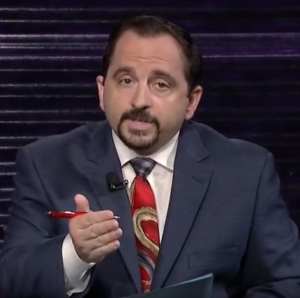 DEZZUTTI: Missing from our lineup today is State Treasurer Walker Stapleton. I feel I need to explain why Treasurer Stapleton is not here.

We made our very best effort to work within Treasurer Stapleton’s very busy schedule. We offered three different dates that would allow us an opportunity to present a debate to you, the voters, within the first week of the mail-in ballots being sent out. We made that request the week after the state assemblies in April. The Stapleton campaign declined those dates but offered two dates that would have pushed our broadcast to a full 10 days after the ballots were sent out. After initially declining their offer of those two dates, eight days later I proposed two additional dates in May. After hearing no response, we decided that we would try to accommodate his schedule, and asked if the original debates they offered were still available. We were told those dates were no longer available.

That brings us to our debate today. We’re disappointed that Treasurer Stapleton could not join us, but as you can see, we did our best. In full disclosure, I want to offer that the other seven candidates running for Governor — both Democrat and Republican — all confirmed the single date we offered them within 48 hours of contact. [Pols emphasis] 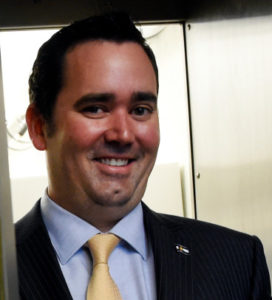 What is most interesting here is not that Stapleton did not appear on the “Colorado Decides” debate, but that his campaign apparently created so much ill will in declining multiple invitations. Dezzutti’s explanation for Stapleton’s absence lasted more than a minute; “Colorado Decides” was intent on making it clear that they went out of their way to accommodate Stapleton at every turn.

Here’s what Mitt’s Nephew (Doug Robinson) had to say about Stapleton’s absence:

“Where’s Walker? This is the question we all need to be asking, right? I’m not surprised, he doesn’t show up at half of our events. We have worked — all of us — the state, every small town and so on, he’s not there. He wasn’t here on PERA reform. He says he was the voice on PERA, yet this was the biggest thing that was happening to PERA in terms of its reform since 2010. He wasn’t at the board meeting, he told us where he was the night of the debate — he said he was in bed! Himself, he said he went to bed early that night. He wasn’t lobbying the legislators, he hasn’t shown up.”

Stapleton has participated in other debates during this election cycle, and he is still scheduled to appear at a Republican candidate debate at 9News later today. So why the absence here?

First and foremost, Stapleton does not do particularly well in debate settings. His campaign knows this and thus tries to limit his exposure as much as possible. We’ve heard that Stapleton maintains a comfortable lead over his Republican opponents, though no numbers have been released publicly in recent months, so this may also be a case where Stapleton’s advisers think that there is nothing for him to gain by engaging in multiple debates.

If Stapleton becomes the Republican nominee for Governor, he’s not going to be able to dismiss these events as casually as his campaign handled the “Colorado Decides” forum. Perhaps Stapleton’s campaign is more than willing to worry about that problem later.