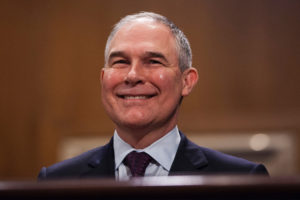 A story published Friday by the Colorado Springs Independent, a frequent source for the straight dope on happenings along the Ronald Reagan Highway when the Phil Anschutz-owned newspaper of record for that city turns a blind eye, is causing considerable concern among Colorado Springs’ neighbors to the south along the city’s principal drainage Fountain Creek. It’s a situation we’re discussed a number of times as Pueblo has sought to hold the Springs accountable for unchecked stormwater and sewage pollution surging into Fountain Creek–but under Donald Trump’s Environmental Protection Agency, the story may be taking a sinister turn:

Despite protests from fellow plaintiffs, the Environmental Protection Agency has agreed to revisit a possible settlement with the city Colorado Springs over alleged Clean Water Act violations caused by the city’s longterm neglect of stormwater management, according to documents obtained by the Independent.

The renewed negotiations come as U.S. District Judge Richard Matsch scheduled an August trial in the lawsuit on May 22, the day after the state’s lead attorney in the case was reportedly fired for a reason the Colorado Attorney General’s Office won’t discuss.

Margaret “Meg” Parish, first assistant attorney general in the Natural Resources & Environment Section, wrote several scathing letters to the EPA in recent months, calling the EPA’s action “shocking and extraordinary” and expressing “deep concern and disappointment” that the agency would unilaterally reopen settlement discussion without consulting co-plaintiffs. Besides the Colorado Department of Public Health and Environment (CDPHE), those include Pueblo County and the Lower Arkansas Valley Water Conservancy District.

The move was particularly alarming, she noted, because the state and EPA had signed an agreement in which both agreed not to communicate with the city without the presence of the other.

The EPA is a lead plaintiff in the long-running litigation over Colorado Springs’ pollution of Fountain Creek, obviously possessing resources local municipalities do not have–especially smaller, poorer communities like Pueblo versus Colorado Springs–to force polluters to work in good faith to clean themselves up. What’s happening here could be interpreted as an end run around the upcoming trial, allowing Colorado Springs to settle on terms vastly more favorable to the city than the trial would likely produce. It follows a request last year by GOP Rep. Doug Lamborn for the EPA to drop the lawsuit entirely.

What changed between the EPA working in good faith with Pueblo and other downstream communities to hold Colorado Springs accountable for stormwater and sewage pollution? Donald Trump became President, appointing the most controversially permissive EPA administrator in the agency’s history in Scott Pruitt. The recent completion of the Southern Delivery System, which pipes Arkansas River water north to Colorado Springs, facilitates future growth in Colorado Springs while increasing the treated sewage flows into Fountain Creek. And now you have the Republican city administration of Colorado Springs cozying up with this new EPA, seemingly in opposition to the parties the EPA was charged with assisting.

When Lamborn’s request to the EPA to terminate its involvement in the lawsuit agaist Colorado Springs was reported, Lamborn’s fellow Republican Rep. Scott Tipton who represents Pueblo stood up for his constituents–reminding Lamborn that “the lawsuit was filed by both the EPA and the Colorado Department of Public Health and Environment for a reason.”

Now that it appears the treachery is moving from the planning to the operational stages, it’s definitely time for Pueblo’s representative in Congress to throw down! If Tipton’s split loyalties between his constituents in Pueblo and his party allow Colorado Springs to escape accountability for polluting Fountain Creek, it’s a very serious problem for Tipton’s re-election.

However this situation resolves, it’s a hard lesson in how times have changed–and how elections matter.