At Least It’s Not Your Incredibly Racist Primary…Yet 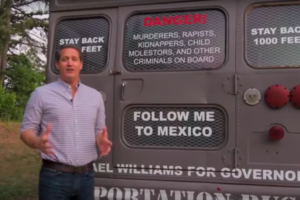 Mother Jones’ Pema Levy reports on the Republican gubernatorial primary in the state of Georgia–a race setting new and unsettling precedent for its open appeals to racism, and even vigilante violence against undocumented immigrants:

The Republican gubernatorial primary in Georgia has devolved in recent weeks into a chest-thumping argument over which candidate hates undocumented immigrants the most. In their rush to prove themselves, two candidates—both currently elected officials—have engaged in an escalating competition over who can personally “round up” and remove more immigrants from the state.

In a television ad released May 9, Brian Kemp—who serves as Georgia’s secretary of state and was formerly a state legislator—suggests he intends to personally detain and remove immigrants from the country. “I got a big truck,” he says, climbing into a pick-up truck, “just in case I need to round up criminal illegals and take ’em home myself.” He then adds with a smirk: “Yep, I just said that.”

“His ad is beyond anti-immigrant, as he quite literally threatens to abduct individuals,” Stephanie Cho, executive director for Asian Americans Advancing Justice Atlanta, said in a statement. “Georgia needs a governor who…does not promote reckless vigilantism.”

On Wednesday, Williams launched a multi-county campaign tour in his “Deportation Bus.” Metal grating covers the windows of the gray bus, and the words “Fill this bus with illegals” run along its side. On the back it reads: “Danger! Murderers, rapists, kidnappers, child molesters, and others on board.”

This is all taking place despite the fact that GOP-dominated Georgia already has laws on the books severely penalizing so-called “sanctuary cities” that have essentially eliminated in that state the sort of complaints traditionally made about American cities that “don’t cooperate” with federal immigration officials. Georgia is a state in which the “solutions” controversially proposed to this issue have already been implemented–but as you can see, the demagoguery against immigrants has only gotten worse.

It’s just another example of the normalization of rhetoric only heard on the distant fringe of American politics before Donald Trump became President. In previous years, the absolutely horrific things coming out of these mainstream gubernatorial candidates’ mouths would be national news, with every Republican in the land forced to either validate or condemn it.

In Donald Trump’s America, this barely registers. That could be even worse than what they’re saying.