It seems like every election year, the lying in politics gets worse. 2018 looks to be no exception. 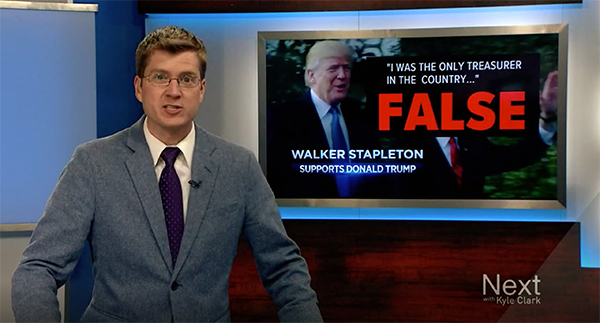 This week, 9NEWS conducted a Truth Test of Walker Stapleton’s new ad, in which Stapleton repeatedly boasts about his support for Donald Trump and claims to have single-handedly stopped a multitude of tax increases. The problem is, just about everything Stapleton says in this ad is either false or wildly exaggerated. [1]

Stapleton is spending hundreds of thousands of dollars to saturate the airwaves with blatant lies. There’s only one way to stop the falsehoods in politics, and that’s to make sure every voter understands who is lying to them and why. If we want Walker Stapleton to stop lying, and everyone should, we have to tell him loud and clear that this is not acceptable.

Sign our petition right now: tell Walker Stapleton to pull his false ad off the air immediately. Don’t wait for a criminal complaint or another damning news fact check. Do the right thing now, take the ad down, and apologize for deliberately trying to mislead the voters of Colorado.

We’ll deliver your names and comments to Stapleton’s campaign, the press, and other elected officials.

Thanks for your timely support for truth in politics. We can’t think of anything more important, especially these days.