Get More Smarter on Wednesday (May 16) 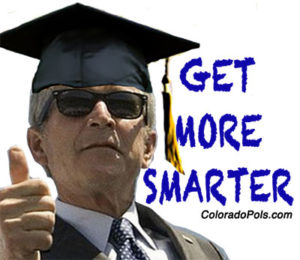 Six weeks from today, you can stop wondering about who is going to be on the ballot in November. It’s time to Get More Smarter. If you think we missed something important, please include the link in the comments below (here’s a good example). If you are more of a visual learner, check out The Get More Smarter Show.

► North Korea appears to be taking a step back regarding talks with the United States over endings its nuclear weapons program. As Politico explains:

President Donald Trump on Wednesday said he will still insist on the denuclearization of the Korean Peninsula, appearing to brush off threats from North Korea to call off a historic summit between Trump and Kim Jong Un if the U.S. demands “unilateral nuclear abandonment.”

Speaking to reporters at the White House, Trump said he’s not backing off that stance. And when asked if Kim’s threat to skip their announced meeting was a bluff, Trump said his administration had not been notified of anything by its North Korean counterpart.

“We’ll see what happens,” he added.

Trump and other White House officials are so far so far viewing the threats as more like chest-thumping — and a potential bid for negotiating leverage — than a true sign that Kim may cancel the upcoming summit scheduled for June 12 in Singapore, according to several White House officials.

A mere 72 hours after the Chinese government agreed to put a half-billion dollars into an Indonesian project that will personally enrich Donald Trump, the president ordered a bailout for a Chinese-government-owned cellphone maker.

“President Xi of China, and I, are working together to give massive Chinese phone company, ZTE, a way to get back into business, fast,” Trump announced on Twitter Sunday morning. “Too many jobs in China lost. Commerce Department has been instructed to get it done!”

Trump did not mention in that tweet or its follow-ups that on Thursday, the developer of a theme park resort outside of Jakarta had signed a deal to receive as much as $500 million in Chinese government loans, as well as another $500 million from Chinese banks, according to Agence France-Presse. Trump’s family business, the Trump Organization, has a deal to license the Trump name to the resort, which includes a golf course and hotels.

Trump, despite his campaign promises to turn over his businesses and have no involvement with them, has still not fully divested himself of his businesses, and continues to profit from them.

Peter Roper reports on the concerns of Sen. Michael Bennet (D-Denver) in a story for the Pueblo Chieftain.

► You can now read more than 2,500 pages of Congressional testimony and exhibits related to inquiries into the infamous 2016 Trump Tower meeting between Trump power brokers and Russian contacts. The Senate Intelligence Committee said on Wednesday that it believes Russia did in fact favor Trump over Democrat Hillary Clinton in the 2016 election.

► Agriculture Secretary Sonny Perdue made a couple of stops in Colorado on Tuesday as part of a four-state tour of the Mountain West. As Aldo Svaldi reports for the Denver Post, farmers and ranchers in Colorado turned out to give him the business:

U.S. Secretary of Agriculture Sonny Perdue received an earful during stops in Broomfield and Brighton Tuesday, and not of Olathe sweet corn.

Members of the Colorado Ag Council voiced their worries over burgeoning trade disputes that have depressed commodity prices and cost them sales, chronic labor shortages and unfilled vacancies at USDA offices in counties around the state…

…The most pressing issue involved trade talks with China, Canada, Mexico and the European Union, and fears that U.S. farmers would have the most to lose if they go badly.

Perdue is scheduled for a visit to Ft. Collins today on his way to Wyoming.

► Senator Michael Bennet (D-Denver) is among a group of lawmakers challenging an order from the Trump administration to remove climate change references from a recent Department of Defense report.

► Republican gubernatorial candidate Walker Stapleton released his first television ad on Tuesday. It is factually incorrect on at least one account.

► As Peter Roper reports for the Pueblo Chieftain, voters may have the final say in determining whether or not Colorado decides to legalize betting on professional and amateur sporting events.

► Politico runs down some of the key takeaways from Tuesday’s Primary elections in four states:

If last week’s primaries focused on GOP efforts to maintain or expand their majority in the Senate, the second big primary night of 2018 was all about Democrats and their chances to win back the House this November. And in both Nebraska and Pennsylvania, Democratic voters picked nominees for battleground seats that the national party didn’t expect — and may not have wanted.

In Nebraska, the Democratic Congressional Campaign Committee wanted former Rep. Brad Ashford as its nominee for an Omaha-based seat. But Tuesday night ended with liberal Kara Eastman, a social worker, proclaimed the winner by more than 1,000 votes.

The results weren’t as clear-cut in Pennsylvania, but the victors in a handful of competitive or Democratic-leaning seats speak to the intraparty fights Democrats are having as the party attempts to work its way out of the electoral wilderness.

In general, moderate Democrats fared poorly, while Democratic women picked up big victories. And in Idaho, Rep. Raul Labrador is the latest Congressional Republican to see his hopes for higher office stall out after a big Primary loss.

► Senator Cory Gardner (R-Yuma) is encouraging the construction of the biggest possible water reservoir on the Western Slope…just don’t expect him to do anything to help secure funding for such a project.

► Senator Gardner is pushing legislation that would provide more ballistic armor for police officers around the country.

► Governor John Hickenlooper has appointed Dan Baer to lead the Colorado Department of Higher Education for the last seven months of his administration. Baer was a Democratic candidate for Congress in CD-7 for much of 2017 before finally figuring out that he had no chance of beating Rep. Ed Perlmutter. Baer’s qualifications for leading the Department of Higher Education are…uh…

► Governor Hickenlooper was in Salt Lake City on Tuesday participating in a forum about energy issues with Utah Republican Gov. Gary Herbert.

► Unaffiliated voters will be able to participate in the June Primary elections for the first time this year, and it is causing quite a headache for county clerks. From the Summit Daily News:

“My head hurts,” Summit County Clerk & Recorder Kathleen Neel told the Board of County Commissioners last Tuesday. “And it’s not going to stop hurting until at least December.”

Neel is sharing a headache felt by county clerks across the state since voters passed Proposition 108, the initiative which allowed unaffiliated voters to cast a ballot for either party’s primary, back in 2016. Aside from having to deal with typical election-year issues, such as ballot certification delays and ensuring the proper delivery of ballots to military members overseas, the clerk also has to make sure to send ballots from each party’s primary to every single unaffiliated voter when none were sent before.

On top of that, the clerk has to find a way to stress to those unaffiliated voters that they can only submit a ballot to one party’s primary — or risk having both invalidated if they fill in and send back both. Colorado has about a million unaffiliated voters statewide, who make up a plurality of the state’s voters.

This will be the first year the initiative is put into practice, and given the stakes in 2018 — when major federal, state and county offices are up for grabs during a critical midterm general election — primary season has become all the more onerous, and expensive.

► Mountain-area lawmakers break down the 2018 Colorado legislative session in this Vail Daily story.

► President Trump is touting a new poll that isn’t really all that flattering, as the Washington Post reports:

Here’s the thing. It is true that Trump has seen an improvement in his approval ratings over the last few months, essentially since he hit a low in December. RealClearPolitics’ average of approval polls shows that pretty clearly: An upswing in approval and a downswing in disapproval. What’s more, Trump’s net approval — those who approve minus those who disapprove — has been better than minus-10 for all of May, the first time it has been that good in about a year…

…More than half the country disapproves of the job Trump is doing. That undercuts the claim at the heart of Trump’s tweet suggesting that Americans are coming around to the job he’s doing. Fewer people disapprove of Trump than used to, supporting his point — but most still think he’s not doing a good job.

► President Trump‘s campaign manager thinks that Colorado and Minnesota might be in play for 2020. Philip Bump of the Washington Post doesn’t agree:

If we factor out the national shifts, we can get a different sense for how the states voted in 2016, relative to years past. In other words, we can see how heavily each state voted for the Democrat or the Republican in each presidential election relative to how the country on the whole did.