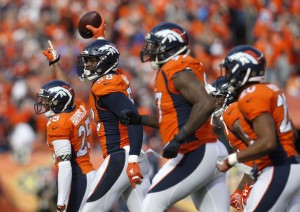 You may soon be able to lose your own money alongside the Broncos.

As CNN reports, there could be a new revenue stream coming to town:

The Supreme Court cleared the way on Monday for states to legalize sports betting, striking down a 1992 federal law that had prohibited most states from authorizing sports betting.

The 6-3 ruling is a victory for New Jersey and other states who have considered allowing sports gambling as a way to encourage tourism and tax revenue. The NCAA, NFL and NBA had backed the federal prohibition.

“The legalization of sports gambling requires an important policy choice, but the choice is not ours to make,” Justice Samuel Alito wrote in the 6-3 opinion. “Congress can regulate sports gambling directly, but if it elects not to do so, each state is free to act on its own.”

The Supreme Court’s ruling essentially allows individual states to make their own determinations on whether or not to legalize sports betting. At least one racetrack in New Jersey is aiming to take bets within a matter of weeks.

While there are no immediate plans to implement legal sports betting in Colorado, it would be silly for lawmakers to not at least consider making the change sometime soon.