(So…much…wrong with this – Promoted by Colorado Pols) 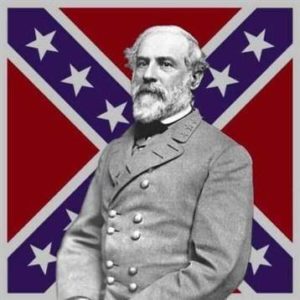 Stapleton, who currently serves as Colorado’s treasurer and has yet to address community concerns about his family’s white supremacist history, added, “He just happened to be for the wrong cause and on the wrong side.”

Lee, who commanded the Confederate army, is responsible for an unfathomable amount of American bloodshed in defense of what he saw as the South’s right to own black human beings as property. Stapleton’s description of Lee as a “great American” runs counter to the fact that Lee’s loyalty to his country was overridden by his devotion to white supremacy.

Over the past year, statues commemorating some of the nation’s most influential white supremacists, including those depicting Lee, have been a source of controversy – and the sites of racially motivated violence.

As you might recall, the so-called Unite the Right rally that took place in Charlottesville late last summer, where white supremacists chanted Nazi-era slogans and murdered a peaceful counter-protester, was centered around opposition to the removal of the city’s monument to Lee.

Stapleton’s comment, of course, came years before the nation’s popular debate around whether statues commemorating racists belong in public areas. But it could be instructive of the gubernatorial candidate’s understanding of racism in America and dedication to policies that promote racial equity – or lack thereof.

Stapleton’s praise of the well-known racist isn’t a one-off.

As the Colorado Times Recorder previously reported, he once praised his great-grandfather, the former Mayor of Denver who is well known for his close connection to the Ku Klux Klan. In a campaign video for his first run for state treasurer, Stapleton said he was “proud” of his family’s political legacy and spoke at length about what he referred to as his great-grandfather Benjamin Stapleton’s “accomplishments.”

Since Stapleton’s election, it appears he hasn’t spoken publicly about his great-grandfather or addressed his white supremacist legacy, despite it being a renewed topic of discussion due to the current debate around whether to change the name of Denver’s Stapleton neighborhood.

And despite repeated requests for comment, Stapleton hasn’t addressed accusations that the History Colorado museum’s removal of references to Mayor Stapleton on its display of the KKK in Colorado is the result of increased donations from the Stapleton family’s foundation. As the Colorado Times Recorder reported, donations from Stapleton’s foundation to the museum quadrupled around the time the museum made changes to its display on the KKK’s political influence in the state, which no longer includes any references to Mayor Stapleton despite once stressing his involvement.

The Stapleton campaign didn’t respond to requests for comment on this piece, either.

In addition to praising well-known racists, Stapleton has received support from people who have been regarded as racist.

Stapleton recently gained the endorsement of former Congressman Tom Tancredo, whose brief run for this year’s Republican gubernatorial nomination was inspired in part by his outrage at the cancellation of the white supremacist group VDARE’s conference in Colorado Springs. Tancredo served as a board member of VDARE, which was labeled a hate group by the Southern Poverty Law Center, and was scheduled to speak at the event.

Tancredo’s support for Stapleton is due in part to his belief that he’s one of the only viable Republican candidates, but he told Colorado Politics‘ Ernest Luning that Stapleton’s opposition to sanctuary cities and tough stance on immigration played a key role in his endorsement.

This post originally appeared on the Colorado Times Recorder.