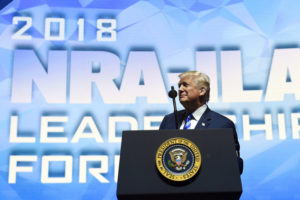 President Trump today delivered a speech to the annual meeting of the National Rifle Association (NRA) in Dallas. You probably won’t be shocked to learn that he is changing his post-Parkland tune regarding potential restrictions on firearms.

In his speech, Trump endorsed a top NRA priority to allow trained teachers to carry concealed weapons in schools and to install more armed security guards. Signs declaring a school as a gun-free zone, Trump said, were essentially invitations to attackers to “come in and take us,” he argued…

..He added: “Your second amendment rights are under siege but they will never ever be under siege as long as I’m your president,” Trump told NRA members, whom he referred to as patriots…[Pols emphasis]

…Friday’s speech was his first appearance before NRA members since the mass shooting at a Parkland, Fla., high school on Feb. 14, which created a new wave of momentum for the gun-control movement nationwide led by the students at Marjory Stoneman Douglas High School themselves.

The massacre also moved Trump to flirt with stricter gun measures in defiance of NRA priorities, such as raising the legal age to purchase AR-15s and similar types of rifles to 21 and expanding background checks to guns sold at shows and online. In a meeting with lawmakers, Trump even mocked Republican lawmakers over the power of the gun lobby, telling one GOP senator he was “afraid of the NRA.”

The president bounced from topic to topic, addressing everything from the importance of arming teachers, to thanking music artist Kanye West for helping double his approval ratings among African-Americans. West has expressed his support for Mr. Trump in recent days, even sporting a “Make America Great Again” hat.

“Kanye West must have some power, because you probably saw, I doubled my African-American poll numbers. We went from 11 to 22 in one week, thank you, Kanye,” the president said. “When I saw the numbers I said that must be a mistake, how did that happen?”

We have nothing more to add here.