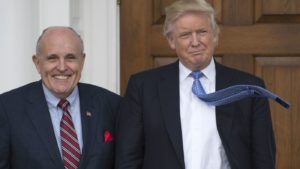 Giuliani’s statement — to Fox News’ Sean Hannity — contradicted Trump, who previously denied knowledge of the payment, which has since spurred a lawsuit against the President.

Later, Giuliani told The Washington Post he had spoken to the President far in advance about publicly discussing the reimbursement, and said he doesn’t expect to be fired. He said his remarks on Hannity were approved by Trump.

In an interview with The Wall Street Journal after the Fox News interview aired, Giuliani said again that Trump had paid Cohen back, but argued that it was not a campaign finance violation or a crime of any kind.

Alright, so that was plenty weird. Today, President Trump took it up a notch. From the Washington Post:

In morning tweets, the president confirmed that Cohen entered into a nondisclosure agreement with Daniels, something Trump called “very common among celebrities and people of wealth.”

Trump stressed that no campaign money was used to reimburse Cohen, calling it a “private agreement.”

“Money from the campaign, or campaign contributions, played no roll [sic] in this transaction,” he wrote.

As Politico reports this morning, the White House is scrambling to figure out how to cover for Giuliani’s comments — which also included another damning statement about the firing of former FBI Director James Comey. From NBC News:

But that wasn’t the only unforced error that Giuliani made last night. He also claimed that Trump fired James Comey because the former FBI director refused to say that Trump wasn’t a target of the investigation — not because of Russia (as Trump told NBC’s Lester Holt) or because of Comey’s handling of the Clinton investigation (as the Justice Department explained).

“He fired Comey because Comey would not, among to other things, say that he wasn’t a target of the investigation,” Giuliani said on Fox last night. “He’s entitled to that. Hillary Clinton got that. And he couldn’t get that. So he fired him. And then he said, ‘I’m free of this guys.’”

So Trump’s new attorney — Giuliani — is saying that the president fired Comey because he wanted the FBI to clear him when in fact the president is a “subject” of the Russia probe even if he’s not currently a target?

Greg Sargent of the Washington Post thinks that this second gaffe by Giuliani might be more significant for Trump, which is saying a lot in itself.