Michelle Wolf Backlash Everything Everyone Hates About Reporters 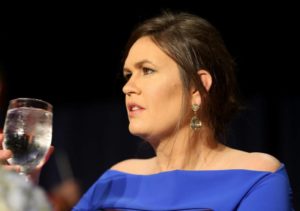 Politico reports on the outrage–outrage, mind you–over comedian Michelle Wolf’s monologue at Saturday night’s White House Correspondents’ Association dinner in Washington, in which Wolf roasted both the fourth estate and members of the Trump administration in attendance within an inch of their very comfortable lives:

Almost immediately after Wolf, best known as a correspondent on “The Daily Show with Trevor Noah,” left the stage at the Washington Hilton, those who pack into the James S. Brady Press Briefing Room on a daily basis began to distance themselves from her performance. A number of journalists deemed her act too caustic.

“The spirit of the event had always been jokes that singe but don’t burn. Reporters who work with her daily appreciate that @presssec was there,” NBC News White House correspondent Kelly O’Donnell wrote on Twitter.

As consternation over Wolf’s jokes continued, White House Correspondents’ Association president Margaret Talev said the comedian’s monologue “was not in the spirit of that mission,” on a night when the association wanted promote a unifying message.

We want to zero in on the response by Margaret Talev in particular:

Talev, a Bloomberg News correspondent who doubles as a CNN analyst, said she had one regret: “To some extent, those 15 minutes” of comedy “are now defining four hours of what was a really wonderful, unifying night. And I don’t want the cause of unity to be undercut.” [Pols emphasis]

Given that the White House is presently occupied by the most polarizing chief executive in modern American history, we have to wonder about the “cause of unity” that seems to have been so important to the organizers of Saturday’s dinner and the surprising number of journalists who have jumped on the bandwagon of attacking Michelle Wolf. We’re not and have never once claimed to be journalists, but it seems to us that the “cause of unity” should not be considered a journalistic pursuit.

In fact, that seems way, way off–enough to invite some pretty basic questions about what journalists think their job should be. Everyone knows that a degree of rapport between journalists and the leaders they report on is necessary, but not to the extent where the desire to maintain that rapport trumps the obligation to report the facts. The dollar-driven relationship between reporters and the powerful subjects of news reporting is widely blamed for, among other things, the rise of Donald Trump.

It’s a phenomenon not unique to White House correspondents–witness last summer’s weird backlash by local reporters in defense of Sen. Cory Gardner, who felt that Colorado citizens who had been waiting for months and longer for a face-to-face meeting were impolite to Gardner once they finally got one. In both cases, it’s reporters who have forgotten that their responsibility is to the public–not to the politicians, however friendly and engaging they or their staffers may be.

If this isn’t obvious to you, you’re either a politician yourself or a journalist. And you’re part of the problem with today’s journalism–not the solution.