A meme on the Facebook page of the Colorado Jewish Republicans: bigotry or just provocation? 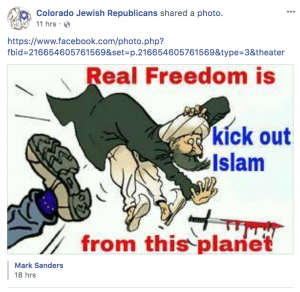 When I look at the Facebook meme on your right, shared by the Colorado Jewish Republicans, I see the same kind of raw bigotry that Jewish people have faced for centuries.

The meme depicts a bearded man in a turban with a bloody sword flying in the air after being kicked. It reads:

“Real Freedom is, kick out Islam from this planet.”

Kopelman said he doesn’t know who, among a dozen authorized people, shared the meme on the Facebook page of the Colorado Jewish Republicans, which holds meetings at the East Side Kosher Deli with prominent public officials, such as Colorado Attorney General Cynthia Coffman and State Sen. Tim Neville (R-Littleton), who helped lead a discussion at the deli last summer on how to make America “red again.”

“It looks like somebody being provocative, and I have no intention of taking it down,” said Kopelman of the meme. “It’s not against anyone in particular. It’s kind of poking back at the people who have been poking at us.”

But when the meme says “kick out Islam from this planet,” isn’t it trashing the entire religion of Islam and advocating violence against Muslims, I asked Kopelman.

“Saying, being kicked off the planet in a cartoon with a drawing of a surprised-looking guy with a bloodied sword in his hand is not advocating violence,” replied Kopelman. “It’s a point of conversation. Just the implication that a conversation-making cartoon is the same as violence is offensive.”

But Jews are a persecuted group, I said to Kopelman. Don’t you sympathize with Muslims who are being attacked?

Kopelman called me hyper-sensitive, but I told him I didn’t think he understood how besieged many Muslim Americans feel, as they’re slammed with bigotry starting at the top, in the form of  from President Trump’s Muslim ban, and running to the bottom, in the form of bigots on local stations like KNUS 710-AM.

The motto of the Colorado Jewish Republicans is, “You are not alone.” But I don’t think Kopelman understands how lonely it can be to be a Muslim in Denver these days.