Sean Hannity is Trump’s Other Chief of Staff 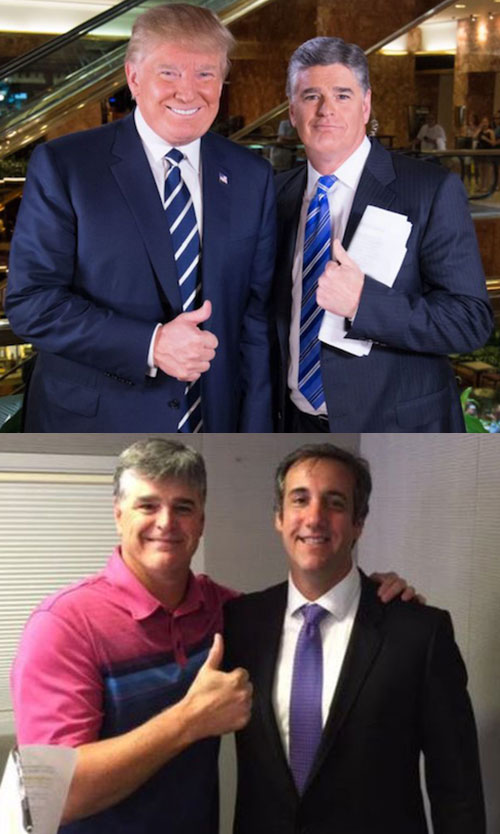 Thumbs up all around! Sean Hannity with Donald Trump (top) and Trump Attorney Michael Cohen (bottom)

The phone calls between President Trump and Sean Hannity come early in the morning or late at night, after the Fox News host goes off the air. They discuss ideas for Hannity’s show, Trump’s frustration with the ongoing special counsel probe and even, at times, what the president should tweet, according to people familiar with the conversations. When he’s off the phone, Trump is known to cite Hannity when he talks with White House advisers.

The revelation this week that the two men share an attorney is just the latest sign of how Hannity is intertwined with Trump’s world — an increasingly powerful confidant who offers the ­media-driven president a sympathetic ear and shared grievances. The conservative commentator is so close to Trump that some White House aides have dubbed him the unofficial chief of staff…

…Trump and Hannity usually speak several times a week, according to people familiar with their relationship. The Fox News host, whose show averages more than 3 million viewers daily, is one of the few people who gets patched immediately to Trump. The two men review news stories and aspects of Hannity’s show, and occasionally debate specifics about whatever the president is considering typing out on Twitter. There have also been times when Trump has assessed the merits of various White House aides with Hannity.

The frequency of Hannity’s contact with Trump means that “he basically has a desk in the place,” one presidential adviser said.

Hannity and White House officials did not respond to requests for comment.

President Trump often promotes Hannity and his show via Twitter, which was weird well before this information about their cozy relationship came to light. If you’re wondering where to draw the line between the Trump administration and Fox News…well, you’re not alone.