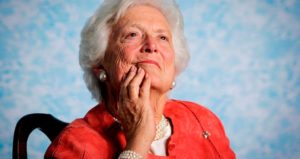 Former first lady Barbara Bush died Tuesday at her home in Houston, Texas. She was 92.

“A former first lady of the United States of America and relentless proponent of family literacy, Barbara Pierce Bush passed away Tuesday, April 17, 2018, at the age of 92,” reads a statement from the office of former President George H.W. Bush.

Bush passed away shortly after deciding to forgo further medical treatments for her failing health.

Having been hospitalized numerous times while battling congestive heart failure and chronic obstructive pulmonary disease, she decided Sunday that she wanted to be “surrounded by a family she adores,” according to an earlier statement released by Mr. Bush’s office.