ICYMI: Beyond the Headlines from State Assemblies

Both Democrats and Republicans held their state conventions/assemblies on Saturday. While you’ve probably seen the headlines from everything that happened over the weekend – including multiple Congressional District assemblies last Thursday and Friday – there are a lot of secondary stories that you may have missed. Let’s get you caught up…

“When President Trump Says Something, He Really Means It!”

This is an actual quote from Rep. Mike Coffman’s speech at the State Republican assembly on Saturday. You might remember that Coffman spoke out forcefullyabout challenging Trump during the 2016 election, but that was back when it seemed improbable that Trump might be elected President. Coffman has since decidedthat he needs to work with Trumpand has even warmed to the idea of campaigningwith Trump in 2018. Coffman’s backpedaling reached its apex on Saturday when he thoroughly buried his face in Trump’s backside.

Greg Lopez: Not Walker Stapleton
Former Parker Mayor Greg Lopez managed to surpass 30% of the vote at the GOP state assembly on Saturday to formally get his name on the ballot in June. Up until Saturday, the only thing anybody really knew about Lopez is that he was one of the first politicians to actually answer the question, “When did you stop beating your wife?”

According to Michael Roberts at Westword, Lopez finds his name on the ballot because of a rousing speech he delivered on Saturday. This is a nice story, but it’s not particularly accurate (watch Lopez’s nothingburger speechyourself). The reason Lopez is on the ballot is because other Republican gubernatorial candidates decided that Lopez was their best potential foil for Stapleton on Saturday. In an interview last week on “The Ross Kaminsky Show,” Mitt Romney’s Nephew let slip that he planned to vote for Lopez (Mitt’s Nephew was a delegate himself, but is seeking to make the GOP Primary ballot for Governor via the petition route). Lopez became the go-to candidate for Republican delegates who didn’t want Walker Stapleton to run away with the vote at the state assembly, and that’s why he’ll be on the ballot in June. 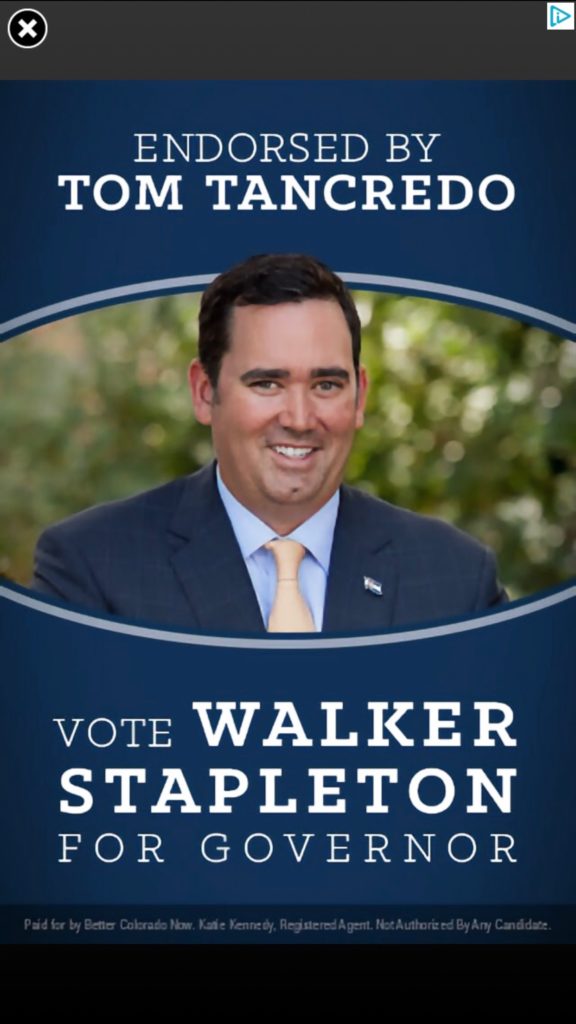 Walker Stapleton Talks Abortion
This might not seem like a big deal, but Republican gubernatorial frontrunner Walker Stapleton has rarely brought up his positions on abortion in the past. On Saturday, Stapleton’s speech to Republican delegates included a line about protecting children “born and unborn,” which is about as far as he’s ever gone (publicly) on this issue. Stapleton still has a long way to go to make up with Republicans on a number of issues.

Stapleton and Tancredo, for Better or Worse
Last week former Republican gubernatorial candidate Tom Tancredo made the surprise announcementthat he would endorse Stapleton for the GOP nomination for Governor. On Saturday, Tancredo did one better by taking the stage himself to nominateStapleton. Having Tancredo’s support no doubt helped Stapleton with the GOP delegate crowd, but this may turn into quite the albatross for Stapleton in a General Election. There’s no going back now – take a look at the digital ad (right) that circulated on Saturday from “Better Colorado Now,” a SuperPAC that exists ostensibly to support Stapleton’s bid for Governor.