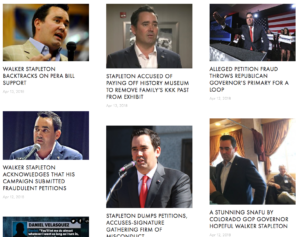 Sometimes the best way to figure out the frontrunner in a Primary race is to take a look at which candidate is getting attacked the most. State Treasurer Walker Stapleton has been the prohibitive favorite for the Republican gubernatorial nomination since before he was even an official candidate, but until recently other Republican candidates had largely stayed away from direct attacks. Now that the GOP Primary is kicking in to high gear, the gloves are coming off.

Stapleton’s campaign has been busy trying to consolidate support, with Tom Tancredo and Rep. Ken Buck recently announcing their endorsements and pals at the Colorado Springs Gazette going out of their way to prop him up. But at the same time that Stapleton is touting new supporters, he’s taking an increasing amount of fire from the right.

An independent expenditure committee (IEC) called “Build Colorado’s Future” — which has been linked to Mitt Romney’s Nephew — has been running digital ads lately that link to the website WhoIsWalkerStapleton.com. The site is an opposition research dump hitting Stapleton on his checkered history with trying to reform PERA, his problems with petition signatures (also detailed in a separate website StapletonPetitionFraud.com), and a 1999 DUI case in California that alleges Stapleton is guilty of a hit-and-run.

During a 9News debate between Republican candidates for Governor on Thursday — which did not include Stapleton or Cynthia Coffman, both of whom declined invitations — Mitt Romney’s Nephew (Doug Robinson) went after Stapleton right off the bat. Here’s his response to a question about whether illegal immigrants suspected of traffic violations should be reported to Immigrations and Customs Enforcement (ICE):

I’m not familiar with DUIs. Walker? He’s not here.

A bit later, Robinson jumps right into an answer about issues on which he disagrees with Stapleton:

I would say first, marijuana policy. Where has he been? He’s been the Treasurer of this state. We’re not getting the taxes that we promised. He had a platform to stand up and to protect Coloradans as marijuana [policy] was rolled out, and he hasn’t been there.

Two, PERA. He says he’s been a voice for PERA for a long time. I am tired of voices. I want action. The PERA situation is twice as bad as it was when he was first on that board. He’s missed, I think, about half of the board meetings. He’s not here today. I expect somebody who’s in that position to stand up and be courageous, and take on tough issues and solve them.

Victor Mitchell responded to the same question by going after Stapleton on his signature PERA issue.

I don’t think PERA beneficiaries should be beaten down and demonized. I think that’s fundamentally wrong. People who receive PERA benefits today don’t receive social security [benefits]. It’s their life. It’s their check. And they haven’t done anything wrong — they’ve paid into the system. We love to throw the word ‘crisis’ around. I don’t believe PERA is in crisis.

Stapleton is seeking to make it onto the Primary ballot via the state assembly process on Saturday, where he will compete against Coffman and a handful of other Republican candidates such as Steve Barlock and Greg Lopez (Robinson and Mitchell are trying to petition onto the ballot). Barlock has been particularly vocal about his concerns over Stapleton’s family ties to the Ku Klux Klan; Walker’s great-grandfather, Ben Stapleton, was Mayor of Denver from 1923-31 and received significant support from white supremacist organizations.