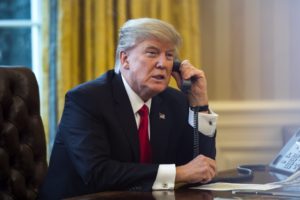 So, uh, about that FBI raid…

This seems like an absolutely terrible decision, as the New York Times reports:

President Trump phoned his longtime confidant, Michael D. Cohen, to “check in” on Friday as lawyers for the two men went to court to block the Justice Department from reading seized documents related to Mr. Cohen’s decade of work for Mr. Trump, according to two people familiar with the call.

It is not clear what else they discussed in a call that came days after a series of F.B.I. raids. Depending on what was said, the call could be problematic for both men, as defense lawyers often advise their clients not to talk to each other during investigations. Mr. Trump and Mr. Cohen still were trying to determine what exactly was seized.

The raids were even broader than have been previously reported. Prosecutors said the raids were part of a monthslong investigation into Mr. Cohen. In addition to searching Mr. Cohen’s office and hotel room, prosecutors also obtained warrants to seize material from his cellphones, tablet, laptop and a safe deposit box, according to people briefed on the warrants.

The Justice Department on Friday revealed that Cohen has been under criminal investigation for several months because of his business dealings.