On Wednesday, a SuperPAC called “Better Colorado Now” kicked off a six-figure television ad buy in support of Republican gubernatorial candidate Walker Stapleton that blows the anti-immigrant dog whistle as soon as the first frame rolls:

“Better Colorado Now” is technically not associated with Stapleton’s campaign, though Stapleton himself actually helped to raise money for the SuperPAC right before he “officially” declared as a candidate for Governor. 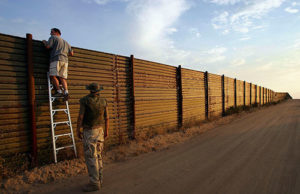 This new TV ad intimates that Stapleton is the “one” Republican candidate for Governor who “supports strengthening our border security,” though it doesn’t bother to explain how the Governor of Colorado would have any power over how the United States deals with its Mexico border.

Come to think of it, the ad also doesn’t specify which border Stapleton would “strengthen.” Perhaps Stapleton envisions walling off Colorado from the rest of the country, which brings up a whole host of new questions.

Do we start by walling off Wyoming and cutting the supply of illegal fireworks into Colorado? If we wall off New Mexico, can we add in a tunnel so that the flow of green chile is not interrupted? Do we need a little corner-sized piece of wall between Colorado and Arizona? Should plans for a wall include a moat with sharks in the water? (nevermind on that last one — obviously we need a shark-infested moat).

Anyway, we thought it would be helpful to poll our readers to give Stapleton an idea of where he should start building his mythical wall. Cast your vote below.