Pruitt Next To Get Pink-Slipped? 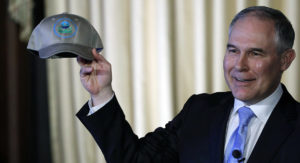 The Hill reports, the Trump administration’s busy chopping block is once again on stand-by:

In a Tuesday afternoon tweet, Curbello said Pruitt’s “corruption scandals are an embarrassment to the Administration, and his conduct is grossly disrespectful to American taxpayers.”

“It’s time for him to resign or for [Trump] to dismiss him.”

EPA Administrator Scott Pruitt’s latest strategy for beating the high cost of living reportedly involves the rental of a condo in Washington, D.C. for the decidedly sub-market rate of $50 a night. The condo just happens to be owned by the spouse of J. Steven Hart, the chairman of big-time energy lobbying firm Williams & Jensen. Especially for an administration that won office on the promise to “drain the swamp,” it’s about as swampy as arrangement as can be had.

And it’s just the latest in a series of ethical missteps for Pruitt, which included a taxpayer-funded junket to Colorado to record an ad for the National Cattlemen’s Beef Association in support of repealing Clean Water Act rules. Pruitt also chartered a costly private flight to Durango that he didn’t need, since Gov. John Hickenlooper was headed there in his executive Beech King Air and had offered Pruitt a seat.

In Donald Trump’s White House, the only unforgivable sin appears to be making the boss look bad. By that measure, Pruitt has got to be reaching the threshold for being put out to pasture. Replacing Pruitt is almost certain to be the environmental policy equivalent of John Bolton as national security adviser, meaning you’ll be wishing for Pruitt soon enough.