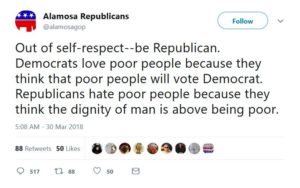 The Denver Post’s Jesse Paul kicks off our press roundup of the latest jaw-dropper gaffe committed in the name of a county-level Colorado Republican Party organization–last week’s posts to Facebook and Twitter by the Alamosa Republicans outlining the reasons why (this is a verbatim quote) “Republicans hate poor people.”

A member of the Alamosa County Republicans has resigned after Facebook and Twitter posts from the organization said that “Republicans hate poor people.”

“The author acted independently and without the concurrence of any other member of the Alamosa County Republicans,” the group said in a subsequent Facebook post Saturday. “The regrettable post was made with the intention of condemning poverty, not persons affected by poverty, and was not meant to insult anyone. However, that occurred, and the author sincerely regrets the post and has offered his resignation from his position with the Alamosa County Republicans, which has been accepted. Actions have consequences.” 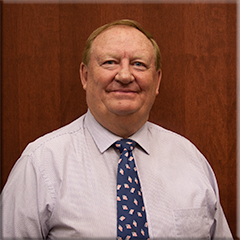 It’s still not known who exactly posted this highly regrettable message, but as Denver7’s Blair Miller reports, speculation is zeroing in on Alamosa City Councilor David Broyles, who has yet to confirm or deny propriety:

It’s unclear who made the original post, but Alamosa City Council member David Broyles, who had previously been listed as a member of the party on its website, was no longer listed on the group’s site Monday.

Alamosa County Republicans Chair Sandra Wagner pointed Denver7 back to the apology post when reached for comment. She did not answer a question as to whether Broyles was the person who made the social media posts.

After Erik Maulbetsch of the Colorado Times-Recorder posted this item on Friday evening, it caught fire nationally despite the Easter holiday weekend–The Hill’s Avery Anapol:

The Alamosa County Republicans issued an apology on Facebook on Sunday, saying that the author of the original post has resigned.

The group asked followers to welcome its mea culpa on Saturday, labeling the post “inappropriate and offensive.” They said the author “acted independently and without the concurrence of any other member of the the Alamosa County Republicans,” but claimed the “regrettable post” was suppose to condemn poverty, “not persons affected by poverty.”

Social media users condemned the group’s apology, with some saying it seems disingenuous given that the original post has still not been taken down from Twitter.

“You literally have the exact same message still posted to your twitter at this moment. That makes the apology seem disingenuous,” one user wrote.

If that’s not enough coverage, you can catch this story at Boing Boing, Newsmax, 9NEWS, FOX 31, and more outlets by the hour! In terms of self-inflicted damage to the Republican brand, this incident falls somewhere between Ted Cruz telling a three-year-old girl “the whole world is on fire” and Dan Quayle’s famous declaration that “I am not part of the problem. I am a Republican.”

Actually no, it’s worse than either of those.

In any event, we do now know that a resignation was prompted by somebody over this moment of singular unfortunate honesty–at least a resignation from the Alamosa Republicans. If it does turn out that Alamosa City Councilor David Broyles was the one who wrote “Republicans hate poor people,” we could see that august body deciding they don’t want to be spoken for in this way either.

And no, it doesn’t matter whether this was “the way he meant it.” The choice of words says it all, consciously or subconsciously.