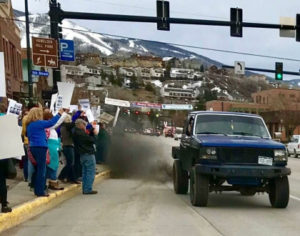 As the Steamboat Pilot and Today reports, Saturday’s March for Our Lives demonstration against gun violence in the northwest Colorado ski resort town of Steamboat Springs was marred by a particular form of vehicular belligerence that has been recently outlawed in the state of Colorado, and we’ve discussed in this space a few times–“rolling coal.”

A driver was cited by Steamboat Springs police Sunday after interrupting a peaceful demonstration with an obnoxious cloud of dark exhaust.

The local “March For Our Lives” demonstration was held early Saturday evening on the Routt County Courthouse lawn. It was part of a nationwide movement aimed at raising awareness around gun violence and school safety…

Saturday’s peaceful protest turned hostile when a blue pickup drove by and spewed exhaust at the demonstrators on the sidewalk.

Demonstrators took pictures of the incident, and the truck’s license plate was clearly visible.

CBS Denver reports that one coal-rolling counterprotester in Steamboat Springs was identified from photos taken by demonstrators as Alex Graham, 20-year-old journeyman asshole from Routt County. You’ll notice in the photo above that Graham’s mean machine is a bit of a jalopy–featuring a number of missing parts we assume were cannibalized to keep the trailer Graham lives in from collapsing while he watches The Price is Right and smokes cigarettes in his off-off-white underwear on weekday mornings. CBS also has a photo of a second coal-roller in Steamboat who has yet to be identified: 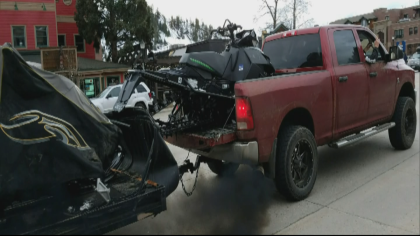 Who you can also rank among life’s winners!

It’s possible that these fine gentlemen were not aware that the Colorado General Assembly passed a law last year specifically outlawing the practice of “rolling coal,” which has only increased in popularity as right-wing diesel truck owners sought out an appropriate response to the growing demonstrations against guns, groping, and other unsavory ole-boy pastimes since Donald Trump became President.

We’re sorry, but while ignorance can certainly be offensive, ignorance of the law is no defense.