What you can do to fight back this week (March 26) 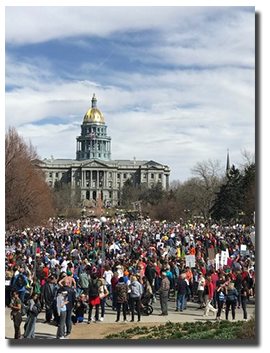 Colorado’s experience with the modern tragedy of mass shootings is among the worst in all of America. Two of the most horrific mass shootings in history, the 1999 Columbine High School massacre and the 2012 mass shooting at the Century Theater in Aurora, are not just news events. They happened here. The victims are buried here. The survivors are our neighbors, our friends, and our family members.

On Saturday, Colorado rose up with hundreds of thousands across the nation to say the gun violence that claims tens of thousands of American lives every year must end. The biggest crowds since the Women’s March made history marched peacefully in Denver, and other cities across Colorado and the nation to demand that the senseless killings in our state and elsewhere not be the final story. That our nation finally adopt common-sense policies that bring the rate of gun violence in America down to at least the level of almost every other developed nation.

The next generation of Americans are tired of hearing that nothing can be done while students are cut down on campuses and military-style weapons continue to be readily available nearly everywhere. They understand the connection between Sen. Cory Gardner’s blocking of even the most rudimentary fixes to background checks and the almost four million dollars he has taken from the National Rifle Association and their allies. They understand that Mike Coffman’s votes against the omnibus spending bill means he voted against the most basic background checks as well. The special interests who have prevented America from saving lives from gun violence no matter how many children needlessly die are running out of lies and time.

We can’t stop now. Every one of us should be inspired by the students of Parkland, and the survivors of Aurora and Columbine, who refuse to be silenced by the politicians and the gun lobby. Let us all keep their courage in mind as we take action on the whole range of issues confronting our state and nation this week.

Here are more ways to fight back for the week of March 26:

What is symbolic violence? What is cultural racism? Why do these issues matter to the residents of Denver and our surrounding communities? Join us for a panel discussion that will allow us to reflect on the roles we play in either helping or hindering racial justice, on why community names matter, and on why names are only the beginning. We have work to do!

Climate change is impacting the price and taste of beer! Join Atlas Obscura Society Denver for a presentation on the impacts, solutions, and what you can do to help drive action on climate change.

One Colorado: Help us stop the Anti-LGBTQ Religious Exemption Bill!

Republicans in the Colorado Legislature have introduced one of the most mean-spirited, blatantly anti-LGBTQ bills to be considered in the Colorado State Legislature in years. Whether it’s in the areas of adoption and foster care, health care, housing, marriage, employment, or public spaces, HB-1206 is designed to roll back protections for LGBTQ Coloradans and their families in nearly every facet of their lives.

To The Ends Of The Earth Screening

Join us on March 27th at an awesome location for a screening of the documentary “To the Ends of the Earth” followed by a panel discussion with an organizer from Food & Water Watch Colorado and renewable energy sector workers. The film will be shown on at the Ecotech Institute in Aurora – a place where students train to enter a career in renewable energy and sustainability. There will even be a popcorn machine!

The Denver Press Club: What does Russia want?

A panel discussion with Russians and those who know Russia. Panelists include Deb Palmieri, honorary consul general of Russia; Anastasiya Bolton, reporter, 9NEWS and Jonathan Adelman, professor at the Josef Korbel School of International Studies, University of Denver. Lev Parkhomenko is a Russian journalist who covers economics on TV Dozhd who was in Denver as a fellow with 9News in the summer of 2016. He will join us via Google Hangout.

Join us bright and early Wednesday, March 28th at 8:00 am in the basement of the Capitol for a brief lobby training, overview of legislation, and then we’ll head upstairs to talk with your legislators about keeping women and families a priority in Colorado lawmaking. Along with our coalition partners, the Women and Families Wednesdays weekly initiative reminds our lawmakers that we aren’t going anywhere when it comes to standing up for better policies for women and families.

Rep. James Coleman: “The fact that children have to leave class to fight for common sense gun policy brings me to tears yet also makes me proud. On one hand, they shouldn’t have to sacrifice their childhood and parts of their education for the legislature, congress and the President to consider the safety of children above rhetoric. On the other hand, they are showing they have an important voice in our politics. They have a clear voice and an honest one.”

The purpose of the Latinx Leadership Summit is to nurture the cultural pride and identity development in the Latinx community on the Auraria Campus. With these efforts we intend to build a stronger sense of community, belonging, leadership capacity, and a sense of activism that permeates our campus and local communities. This summit intentionally commemorates the work of Cesar Chavez and recognizes those in our Latinx Community whose contribution and impact are reflective of his Life, Legacy and Leadership.

Where: St. Cajetans, Auraria Campus, Denver
When: Thursday, March 29 at 9:00am

Colorado state legislators are trying to institute unnecessary and harmful restrictions into our state Medicaid program through SB18-214 (Request Self-sufficiency Waiver Medicaid Program). This is a bill in search of a problem that doesn’t exist. This is simply another partisan attempt to cut the Medicaid program and strip health insurance from people that need it. The real problem is that too many companies aren’t providing health insurance and aren’t paying hard-working families enough to get the health coverage they need.

Celebrate Women’s History Month by enjoying powerful short films by, about, and for women! LUNAFEST, brought to you by @LUNA Bar, is a traveling short film festival celebrating women filmmakers. Join Colorado Women’s College at DU on Thursday, March 29th at 6:30pm where we’ll be hosting a LUNAFEST screening.

Join Planned Parenthood activists for an evening of food, drinks, and activism! This is a great opportunity to meet and greet with like-minded people and brainstorm ideas to protect reproductive health care in Colorado! Please RSVP using the link provided. The event location will be provided upon RSVP. See you there!

Where: Pueblo, CO (location provided upon RSVP)
When: Thursday, March 29 at 7:00pm

PPRM is hosting one of our first events in Durango – and you’re invited! We will be screening the iconic film, “She’s Beautiful When She’s Angry.” This documentary “resurrects the buried history of the outrageous, often brilliant women who founded the modern women’s movement from 1966 to 1971.” The film recounts the harrowing journey of women’s rights activists in the mid-1900s with humor and heart. It is a story that will resonate with any activist facing the new challenges surrounding reproductive rights today.

Where: Durango, CO (location provided upon RSVP)
When: Friday, March 30 at 5:00pm

Fuerza Latina: The Realities of Trauma and Stress on Immigrants in Our Community

It’s a privilege to fight with you every week to protect what makes America great. We will prevail. See you next week.