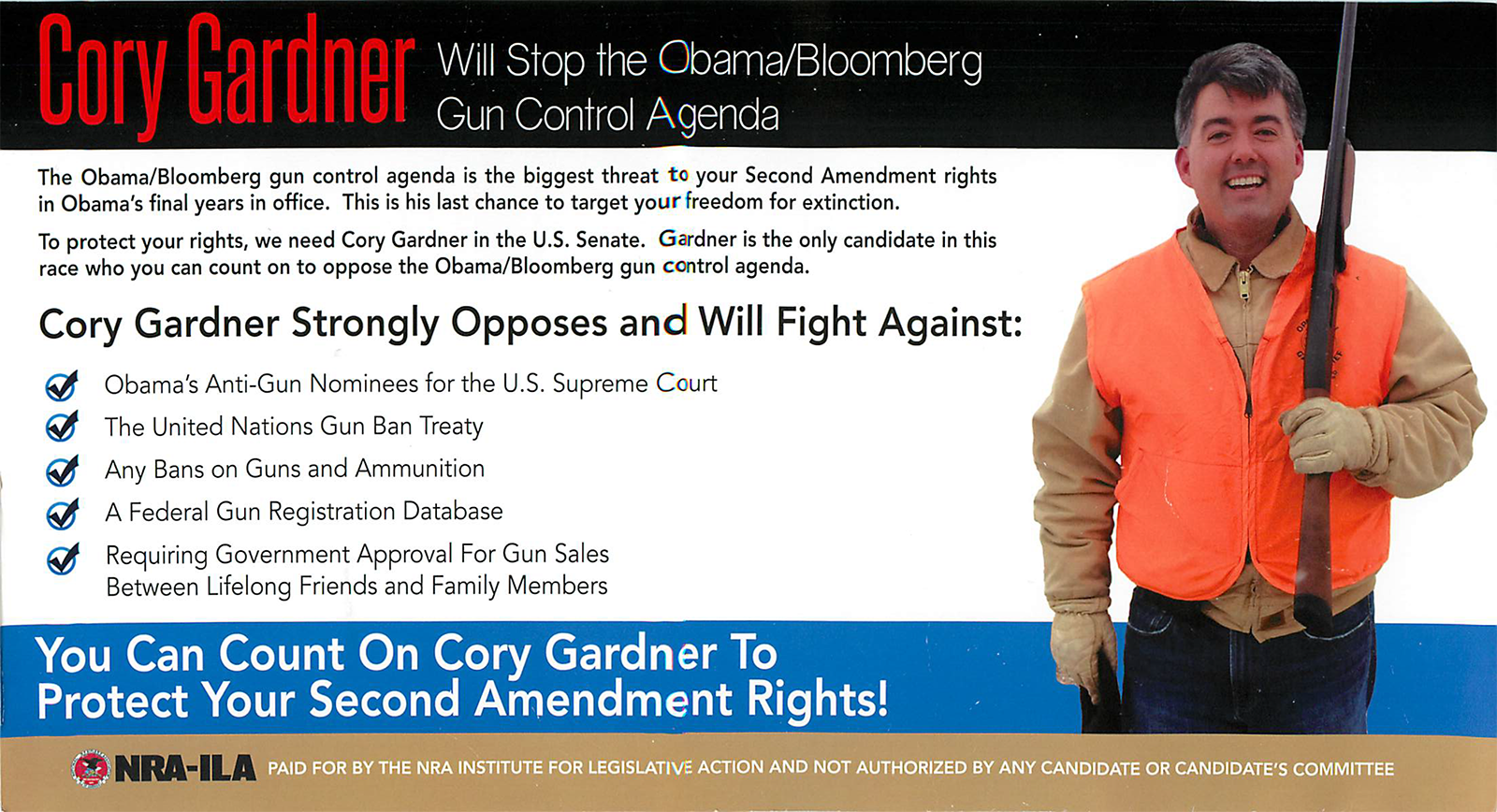 Salon’s Amanda Marcotte  posted a story yesterday that follows up on last Sunday’s revealing appearance by Sen. Cory Gardner on CBS’ Face the Nation–in which Gardner was confronted about a secret hold he has placed on legislation from a fellow Republican Senator to improve background checks on gun purchases.

Today’s story explains in detail a duplicitous strategy long employed by the National Rifle Association and their Republican allies in Congress in which they pretend to support limited reforms like the Fix NICS bill, while stalling even these small-scale measures behind closed doors–exactly what Gardner was caught having done on national television at the beginning of this week:

Sen. John Cornyn, R-Texas, seemingly took the NRA’s comments at face value and introduced the Fix NICS Act of 2017, which is supposed to help improve recordkeeping and stop people like Dylann Roof and Devin Patrick Kelley — two mass shooters who should have failed to pass a background check, but didn’t — from getting guns. He introduced the bill in November, with the public support of the NRA. Mysteriously, the bill has gone nowhere in Congress.

The entire saga of the Fix NICS Act offers an important glimpse into the labyrinthine politics of gun control. It’s a system where the NRA proposes “compromise” bills that allow Republicans to look sensible about gun control, and then the organization goes out of its way to undermine even those minor reforms. The result, intended or otherwise, is that the NRA and Republican legislators can claim to care about keeping guns out of the hands of dangerous people, while doing little or nothing toward accomplishing that goal.

Which brings us to Sen. Gardner’s secret hold on the bill:

…[E]ven this weak bill seems to have no momentum in Congress, which suggests that something weirder and darker is going on. A hint as to why emerged over the weekend, when it was reported that Sen. Cory Gardner, R-Colo., had put a hold on the bill, keeping it from leaving committee. When asked why on “Face the Nation” last Sunday, Gardner didn’t quite admit to blocking the bill, but said, “I think there are some of us who are talking about due process issues in the bill and legislation.”

Salon reached out twice to Gardner’s office, asking for clarification about these “due process” concerns, and received no answer. Gardner ranks No. 5 on the Senate list of recipients of NRA funding, having accepted more than $3.8 million in campaign funds from the organization during his political career. [Pols emphasis]

“The background check system has been upheld by the Supreme Court when people have challenged whether it’s an appropriate system,” said the Brady Campaign’s Avery Gardiner. “I don’t understand his due process concerns.”

Gardner refused to clarify the nature of his “due process concerns” with the bill on Face the Nation. It was apparent in Gardner’s fumbling response to the questions from Face the Nation’s Margaret Brennan that he did not expect them, which makes sense given that the secret hold he has placed on the Fix NICS bill had not been previously reported. The question of who leaked the existence and propriety of this hold to CBS has not yet been answered, but speculation ranges from Democrats to the bill’s Republican sponsor Sen. John Cornyn himself. Cornyn is under consider pressure to pass this legislation, having introduced it in response to the Sutherland Springs shooting that killed 26 people and could have been prevented.

Gardner’s refusal to explain his concerns with the bill most likely mean he doesn’t have defensible concerns, and is blocking this legislation supported by over 90% of the public purely in deference to the NRA and its duplicitous political strategy of stalling even small reforms–reforms they pay lip service in public to supporting. The NRA claims credit for the original federal background check system, but in truth the gun movement in America is deeply divided over any restrictions on gun ownership including criminal convictions.

Last week’s ambush on Face the Nation was a stunning revelation of a massive problem in American politics, a problem that explains the disconnect between the American public’s growing support for tougher gun laws and the frustrating political inability to make that a reality. As mass shootings with military-style weapons take ever-greater tolls of American civilians while nothing happens in Washington, the American people demand to know why.

And now we know the reason. The reason is Cory Gardner.