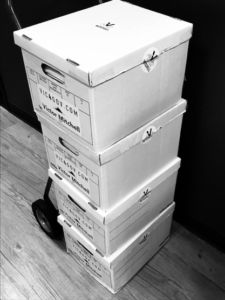 Look at all them boxes

Four boxes of signed and notarized petitions were wheeled into the Secretary of State’s office by the Mitchell campaign’s legal representative, Attorney John Snow, of the Hackstaff and Snow law firm that supervised the petition drive, with the assistance of the Lincoln Strategy Group.

Here’s what the candidate himself had to say about his petition drive:

I saw the petition drive as an outstanding opportunity for grassroots politics that engages with real voters. We wanted to collect the most petitions to show our commitment to winning this campaign, just as we’ve approached our Facebook social media campaign,  where we have more friends and followers than any other gubernatorial candidate, by a wide margin. We did it and there will be many more big wins in the days ahead. Just watch.

Is “just watch” a new slogan, or just an oddly-abrupt way to end a statement? Either way, Mitchell appears to have been very careful in making sure they had enough signatures for ballot access as the third Republican campaign to drop off boxes with the Secretary of State’s office. On the Democratic side of the race, only Michael Johnston has submitted petition signatures thus far; Jared Polis and Donna Lynne (and Noel Ginsburg) are expected to submit signatures, although Polis is also going through the caucus route for ballot access.

For Mitchell, turning in more than 26,000 signatures is an important validation of a campaign that has been relatively quiet thus far (except for that excellent appearance on “The Get More Smarter Show“). Mitchell has already committed $3 million of his own money to his campaign, the bulk of which is likely now earmarked for a barrage of television and digital media ads in advance of the June Primary.