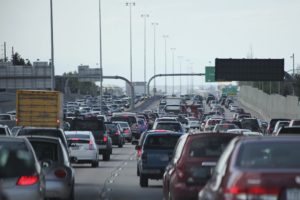 As the Denver Business Journal’s Ed Sealover reports, mark this down as another example of why Colorado can’t have nice things:

Colorado Senate Republican leaders threw cold water Monday on a new, business-backed transportation-funding plan, saying they now believe there’s enough money in the budget for roads this year and next that lawmakers won’t have to ask voters for more.

A trio of business organizations — Colorado Concern, the Colorado Motor Carriers Association and the Colorado Springs Chamber of Commerce and Economic Development Corp. — are pushing a proposal that could generate billions of dollars by increasing the specific ownership tax on new and existing vehicles and pair that new revenue with as much as $300 million annually from the state budget…

However, leaders in the Republican-led Senate left no doubt during their weekly media briefing Monday: No such ballot referral from their body would be forthcoming. Senate President Kevin Grantham, R-Cañon City, said he’s told groups seeking a new source of revenue for roads and transit that they should prepare to work through the petition process rather than the Legislature to get something on the ballot. [Pols emphasis]

We don’t expect there to be unanimous agreement on the need for a tax increase to pay for backlogged transportation needs across the state. The point of the 1992 Taxpayer’s Bill of Rights (TABOR), which obliges elected leaders to run a statewide ballot campaign for most some revenue increases, is not that there will never be a need to raise taxes. In theory, the idea is that tax increases can happen as needed as long as the voters approve it.

But if Republicans won’t even refer a measure to ask the question, how can voters approve anything? Yes, the business lobby could run a ballot petition drive, though under 2016’s Amendment 71 constitutional amendment ballot questions have become substantially more difficult to qualify for the ballot. The biggest reason Republicans in the legislature don’t want to run a ballot measure, aside from the usual ideological mental blocks, is their own desire to float billions of dollars in new bond obligations–which the DBJ correctly notes could blow holes in future budgets if today’s rosy economic forecasts don’t pan out.

Either way, this is just another example of the business community’s generous support for Republican candidates for office coming back to bite them. The overwhelming consensus outside a narrow segment of conservative ideologues is that yes, the government needs more revenue for roads. Not rearranged or borrowed revenue, more revenue.

All you’ve got to do is convince a bunch of guys who want to “drown government in the bathtub.”

Who you helped elect.