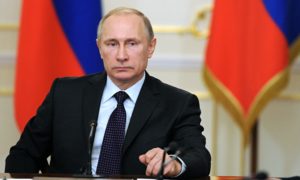 Russian President Vladimir Putin is laughing at America on the inside.

This is troubling, to say the least. As NBC News reports:

A top intelligence official said Tuesday that the U.S. is “probably not doing enough” to combat Russian attempts to interfere in American elections — prompting the fury of several Democratic lawmakers — and acknowledged that he’d not been directed by President Donald Trump to do more to stop such meddling by Moscow.

At a U.S. Cyber Command hearing before the Senate Armed Services Committee, Adm. Mike Rogers, the director of the National Security Agency, said he had not been given the authority by Trump, or Defense Secretary James Mattis, his direct boss, to strike at Russian cyberoperations against the U.S.

Rogers admitted that Russian President Vladimir Putin had likely concluded there was “little price” to pay for trying to disrupt U.S. elections.

We know that Russia meddled in the 2016 election in the United States, and we’re all but certain that they will try to do the same thing in 2018. But…nothing:

“No, I have not,” Rogers responded, adding later that it “is probably fair to say that we have not opted to engage in some of the same behaviors that we are seeing.” [Pols emphasis]