Paid For By The NRA–But What About Paid TO The NRA?

As bloggers who focus on Colorado politics, it shouldn’t be a surprise that we spent a fair amount of time running searches on the Colorado Secretary of State’s TRACER campaign finance disclosure website. Recently, with the National Rifle Association’s controlling influence in Republican politics under the spotlight, we’ve naturally looked at the NRA’s funding of candidates like we assume plenty of others have.

But we also ran another search that turned up something interesting–what about payments made to the NRA? 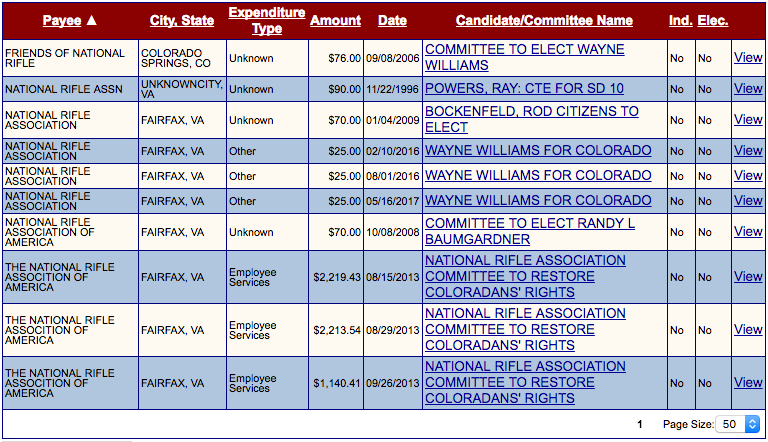 As you can see, there’s not very many of them. You can disregard the larger amounts which appear to be transfers from one NRA entity to another. That leaves a couple of very old payments from obscure figures, a payment from Sen. Randy Baumgardner back in 2008, and several payments from Colorado Secretary of State Wayne Williams.

Before the controversy over the NRA’s role in American politics escalated after last week’s school shooting in Parkland, Florida, these expenditures most likely wouldn’t have attracted any attention. But now we’re obliged to ask the question: is Wayne Williams paying his NRA dues out of campaign funds? Even if that’s legal, we can’t say it looks good. Maybe if he had some company with other Republicans doing so, but it doesn’t appear so.

It’s not like Williams, like any Republican with a pulse in the last three decades, would be worried about recouping his investment. Obviously, the NRA doles out more to Republican politicians than they expect to get back in dues and magazine subscriptions. Nobody’s suggesting the existence of a kickback scheme in $25 increments.

It’s just weird, in a way that doesn’t look great below contemporary headlines.