UPDATE: Testimony is set to go late into the night in the Colorado House State Affairs Committee–but for much of the hearing on the first bill up for debate today, HB18-1037 to allow concealed weapons on school campuses, Republicans on the committee (seats right) were reportedly absent: 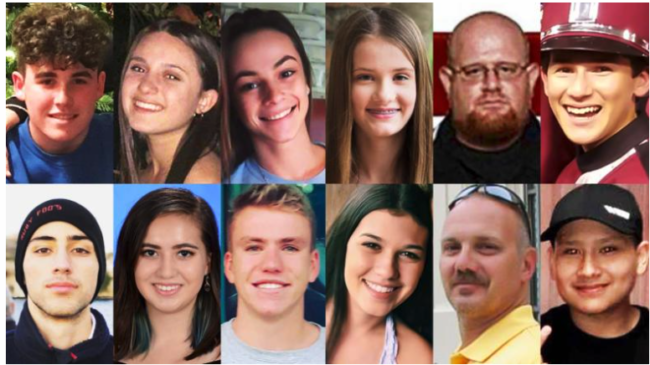 Victims of the school shooting in Parkland, Florida last week (via CNN)

The Colorado legislature is largely focused today on debates about ill-timed gun rights legislation from Republicans, but a similar scene is unfolding across the country.

The New York Times reports on a quickly-growing movement in Florida:

The campaign ads are already blaring, attacking Florida Republicans for supporting pro-gun laws. Now students — survivors of the mass shooting at Marjory Stoneman Douglas High School — have traveled by busloads hundreds of miles to protest at the State Capitol.

Seven days after the killing of 17 people at the Broward County school, Republicans, who dominate government in the state, are facing pressure unlike any they have experienced before to pass legislation addressing gun violence. The State Legislature is in session for roughly two more weeks, and Republicans have concluded that it would be catastrophic to wrap up without doing something to address the mounting outcry.

The debate now is over what counts as doing enough. [Pols emphasis]

Republicans split — sharply, and sometimes face to face — with student demonstrators over that question on Wednesday morning.

As the Washington Post reports, right-wing conservatives recognize that this new group of activists, in the form of Florida high school students, are a force to be reckoned with:

Those students, who rapidly turned themselves into activists and organizers after 17 of their fellow students and teachers were murdered at their school, have become the most visible face of this new phase of the gun debate, and conservatives are absolutely livid about it. As a consequence, they’re desperately arguing not just that the students are wrong in their suggestions for how gun policy should be changed, but also that they shouldn’t be speaking at all and ought to be ignored.

There are two critical reasons the right is having this reaction, one more obvious than the other. The plainer reason is that as people who were personally touched by gun violence and as young people — old enough to be informed and articulate but still children — the students make extremely sympathetic advocates, garnering attention and a respectful hearing for their views. The less obvious reason is that because of that status, the students take away the most critical tool conservatives use to win political arguments: the personal vilification of those who disagree with them.

Also on Wednesday, President Trump met with families affected by school shootings to hear their perspectives on the change that is needed. From CNN:

President Donald Trump heard a series of heartfelt stories and pleas for change during a meeting Wednesday with people affected by some of the nation’s highest-profile deadly school shootings, including the 1999 Columbine High School shooting, the 2012 Sandy Hook Elementary School massacre and last week’s shooting at Marjory Stoneman Douglas High School in Parkland, Florida.

Andrew Pollack, a father of one of the 17 victims who died in last week’s Florida shooting, said he was speaking Wednesday because his daughter couldn’t.

“We as a country failed our children,” he said. “This shouldn’t happen.”

He asked how it was that America could protect its airports, its concerts, its embassies and even the elevators at the Department of Education, but not its schools.

“How many schools, how many children have to get shot? It stops here with this administration and me. I’m not going to sleep until it is fixed. And Mr. President, we’ll fix it. Because I’m going to fix it. I’m not going to rest,” he said.

Support for gun control policies in the United States has never been higher, according to one recent polling estimate. Will our elected officials actually reflect that desire for change?