Get More Smarter on Thursday (February 15)

There have now been 18 school shootings in 2018 alone. This year is only 45 days old. It’s time to Get More Smarter. If you think we missed something important, please include the link in the comments below (here’s a good example). If you are more of a visual learner, check out The Get More Smarter Show.

► In his first public response to Wednesday’s school shooting in Parkland, Florida, President Trump said that students should feel safe in their schools because, uh, well…

President Donald Trump struck a solemn tone Thursday after the deadly school shooting in Florida, describing a “scene of terrible violence, hatred and evil” and promising to “tackle the difficult issue of mental health,” but avoiding any mention of guns…

…He did not answer shouted questions about guns as he exited the room.

While Republicans continue to say much but do nothing, Connecticut Sen. Chris Murphy is not mincing words in blaming Congress for sitting on its hands.

This image from CNN.com says everything in one word: 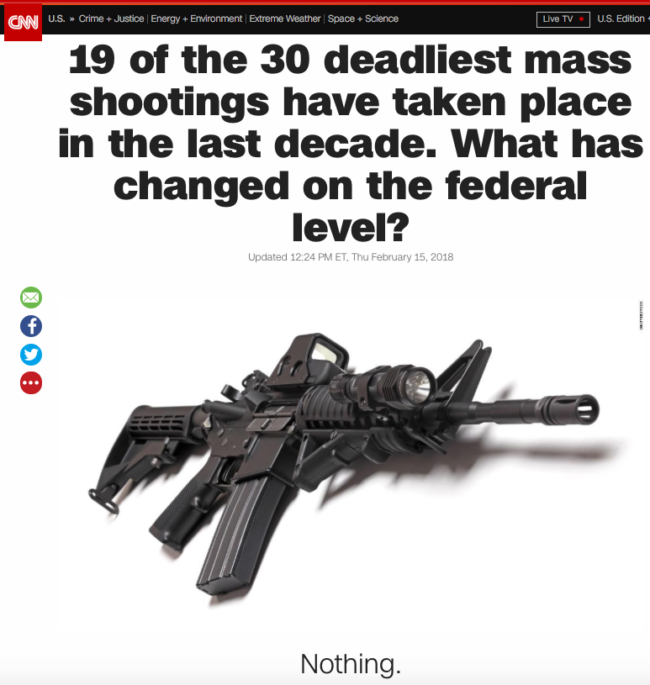 Here’s a brief look at what Colorado elected officials had to say in response to Wednesday’s shooting.

► State Treasurer Walker Stapleton is going to Texas to raise money for his 2018 campaign for Governor. The headliner on the fundraiser is Stapleton’ cousin, former President George W. Bush.

► Republican lawmakers in Colorado insist that they are going to continue to support funding for the Colorado Civil Rights Commission, even after they voted to hold up reauthorization of the Commission at a Joint Budget Committee meeting.

► Colorado Senators Michael Bennet (D-Denver) and Cory Gardner (R-Yuma) are promoting an immigration reform plan of their own. The White House, meanwhile, is threatening to veto any immigration plan that it doesn’t like (which seems to be all of them). From the Washington Post:

The White House on Thursday issued a veto threat on a bipartisan immigration plan in the Senate that was emerging as the best hope for a legislative deal, likely dooming congressional attempts to protect younger immigrants known as “dreamers” from possible deportation.

Press secretary Sarah Huckabee Sanders said in a statement that the administration “strongly opposes” the proposal unveiled a day earlier whose sponsors sought to incorporate elements of Trump’s immigration framework to gain his support. However, the legislative proposal _ to be offered as an amendment Thursday during a round of immigration votes in the Senate — differed from that framework in some key areas.

The plan from the self-anointed “Common Sense Coalition” would make immigration policy “worse by weakening border security,” Sanders said, adding that if the plan reached Trump’s desk his advisers would “recommend he veto it.”

The threat came hours before senators prepared to vote on competing immigration proposals, all of which looked doomed to fail, and top GOP leaders were doing little to encourage bipartisan accord.

► This one’s for you, Sen. Cory Gardner:

► Congressman Mike Coffman (R-Aurora) is calling once more for the resignation of a Veterans Affairs Secretary. From 9News:

Coffman wants the head of the Department of Veterans Affairs to resign after a report revealed his office improperly accepted gifts and then mislead investigators.

“The abuses detailed in the VA’s inspector general report violate the trust and integrity that our Veteran’s and taxpayers demand and deserve … ,” Rep. Coffman said in a statement. “Secretary [David] Shulkin has done little to clean up the VA and given the facts of this IG investigation, it’s clear to me that he lacks the moral authority to get the job done.”

► The outdoor recreation industry is using its economic power to push for political changes.

► The state legislature rejected a push from the City of Denver to provide “safe” injection locations for drug users.

► Legislation to fix a drafting error from 2017’s most high-profile bill in Colorado is at last on its way to the desk of Gov. John Hickenlooper.

► A third White House official has resigned after learning that they would not be given a full security clearance because of problems with their background checks.

► Republican legislators in Colorado are proposing to take the amount of extra money earned through changes in federal tax law and double that amount in new expenditures.

► It’s no secret that the overwhelming majority of money from gun groups (such as the NRA) winds up in the political coffers of Republican candidates.

► We should listen to our children.