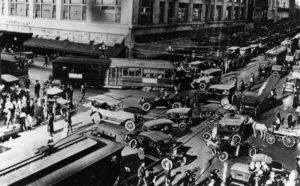 We wrote in this space a couple of weeks ago about President Trump’s plan to beef up America’s crumbling infrastructure by moving around some decimal points in the federal budget and then telling individual states to write big checks to cover the rest of the costs. The White House formally unveiled their big plan today to much puzzlement from people who get paid to do the math on these sort of things.

As the New York Times reports:

The proposal, to be unveiled the same day as Mr. Trump’s 2019 budget, faces long odds on Capitol Hill, where members of both parties — particularly Democrats — are skeptical of any plan that fails to create a dedicated new funding stream to address the nation’s crumbling infrastructure. Lawmakers are also doubtful that such a small federal investment will be sufficient to spur an infrastructure spending boom…

…The odds of such a bipartisan effort coming together in the current political environment are long. White House officials said the new spending would be offset by unspecified cuts elsewhere in the budget, which are all but certain to be roundly criticized by Democrats.

Many infrastructure experts consider the ratio Mr. Trump’s aides are proposing for a public-private plan — essentially creating $6.50 in private investment for every federal dollar spent — to be largely out of reach. And the president plans to leave it up to lawmakers, who are deeply divided on how to finance any infrastructure effort, to decide on key questions such as whether to enact a gas tax to pay for it or slash other types of spending.

The White House is privately conceding that this infrastructure plan isn’t going to go anywhere with Democrats or Republicans on Capitol Hill on account of it being completely stupid. The Trump plan touts $1.5 trillion in infrastructure spending, which is magically created from $200 billion in federal funding and is nothing close to what we actually need (The American Society of Civil Engineers estimates that the U.S. needs an infrastructure investment of $4.59 trillion by 2025). In short, as Vox.com writes, the Trump plan contains “no actual source of new money.”

Critics say the Trump infrastructure plan is particularly unworkable in rural communities. Here in Colorado, we know that the Trump proposal isn’t workable anywhere. As John Frank explained in a story for the Denver Post in late January:

“On first blush, it sounds like a token effort,” said Ted Ott, the CEO of Colorado Barricade Co., a specialized contractor that works with construction companies.

The early details suggest the plan includes $200 billion in federal spending over 10 years and puts state and local governments on the hook for 80 percent of highway projects — a reversal of the current ratio. Moreover, the proposal appears to prioritize states with a dedicated state revenue source for transportation money, potentially putting Colorado at a disadvantage.

…It also includes the George Washington and Baltimore Washington parkways, the Washington Aqueduct and the transmission assets of the Tennessee Valley Authority and Bonneville Power Administration on the list for “potential divestiture.”

The Trump administration also wants to turn the International Space Station (ISS) into some sort of “orbiting real estate venture” overseen by private industry. Even Republicans such as Texas Sen. Ted Cruz are dumfounded by the idea of just turning the ISS over to private enterprise considering that the U.S. government has spent nearly $100 billion on the project.

Don’t say we didn’t warn you when Trump tries selling the moon to the Martians.