Behold! The Dumbest Legislation of 2018! 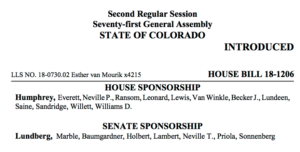 We’ve seen some pretty ridiculous legislative proposals emerge from the State Capitol over the years, from cat microchips to a pre-emptive ban on microchipping humans. Most of these stupid proposals have little support and are quickly killed in committee, but sometimes idiotic legislation emerges that somehow garners the support of multiple lawmakers.

The primary sponsors of House Bill 18-1206 are Republicans — State Rep. Stephen Humphrey and GOP Sen. Kevin Lundberg — but 19 other Republicans were listed as co-sponsors at last check. The legislation seeks to establish something called the “Live and Let Live Act,” which is outlined in 16 pages of some of the most excruciating gibberish you’ll ever read. The primary purpose of HB-1206 is to make it legal for religious- and faith-based organizations to discriminate on the basis of their opposition to any sort of marriage that does not involve one woman and one man.

It doesn’t take long before the Masterpiece Cakeshop case, which originated in Lakewood, Colorado, garners a mention…though the explanation is a little bizarre:

“In Colorado, a cake baker who willingly served customers from every walk of life [Pols emphasis] was forced to shut down an entire facet of his business, forced to undergo government “reeducation,” and required to file constant compliance reports when he declined to add his artistic talents to the creation of a wedding cake that would have celebrated a marriage his conscience required him not to participate in.”

Masterpiece Cakeshop owner Jack Phillips in fact refused to bake a cake for two men who were planning a wedding. The only reason we even know about any of this is because Phillips expressly refused to serve customers “from every walk of life.”

“Protecting religious freedom from government intrusion is a state interest of the highest order. Legislation advances this interest by remedying, deterring, and preventing government interference with religious exercise in a way that complements the protections mandated by the state and federal Constitutions.”

In other words, the “Live and Let Live Act” is a fancy way of saying that it should totally be okay for people to discriminate against others based on their personal opinions of the definition of marriage. A similar “Live and Let Live” bill was passed in the Arizona legislature in 2014 — The New York Times called it “A License to Discriminate” — and was  subsequently vetoed by Republican Gov. Jan Brewer.

House Bill 18-1206 has been assigned to the House Judiciary Committee, where it will likely be killed good and dead.