At Least He’s Not Your Attorney General 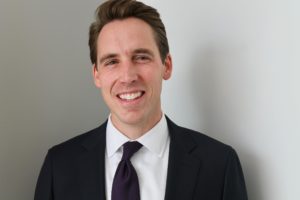 Missouri Attorney General Josh Hawley is seeking the Republican nomination for U.S. Senate in 2018, and he’s apparently willing to say just about anything to gather support for his campaign. As CNN reports:

“The sexual revolution has led to exploitation of women on a scale that we would never have imagined,” Josh Hawley said in a December 7 speech to Christian pastors at an event hosted by the Missouri Renewal Project…

…”You know what I’m talking about, the 1960s, 1970s, it became commonplace in our culture among our cultural elites, Hollywood, and the media to talk about — to denigrate the biblical truth about husband and wife, man and woman,” Hawley said.

Hawley argued that there’s a “human trafficking crisis” because “our culture has completely lost its way.”

“We must also deliver a message to our culture that the false gospel of ‘anything goes’ ends in this road of slavery,” Hawley said. [Pols emphasis]

I didn’t go to one of those fancy private schools, but the history I learned in public schools & Mizzou taught me that the evidence of trafficking of women for sex goes back to before 2000 BC. It didn’t begin with women’s rights and the birth control pill. @HawleyMo