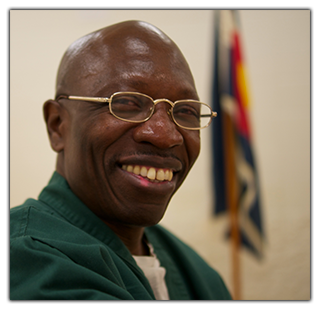 A little over a year ago, ProgressNow Colorado members took action along with criminal justice reform advocates and concerned Denver residents to fight for the freedom of a man who spent nearly 30 years in prison for a crime he didn’t commit.

With your help, Clarence Moses-EL walked free. But it’s not over.

Clarence Moses-EL was convicted of sexual assault in 1987 based on an identification that the victim says came “in a dream.” No physical evidence ever connected Clarence to this terrible crime, and DNA evidence that could have cleared him many years ago was improperly destroyed by Denver police. Over time, the case became less about justice and more about protecting the reputation of the Denver DA’s office and police department.

But justice prevailed. After a second trial that many said never should have happened, Clarence walked free.

In 2013, progressives in the Colorado legislature passed an important new law granting compensation to innocent people who are wrongly convicted and later exonerated. Under the law, Clarence Moses-EL is entitled to a significant sum. As a 62-year-old man who spent almost three decades behind bars, Clarence lacks the job skills necessary to provide for himself and his family. Clarence’s case is the perfect example of why this law is necessary.

Sadly, Republican Attorney General Cynthia Coffman doesn’t see it that way. Even after Clarence Moses-EL served decades for a crime he did not commit, and has been acquitted after a controversial retrial, AG Coffman has announced that her office will oppose Clarence’s request for compensation. On top of everything Clarence has suffered, this is an insult that can’t be excused. The man spent 28 years in prison for a crime he did not commit. The state of Colorado ought not to force him and his family to live out the remainder of his free years in poverty.

Send a message to Cynthia Coffman right now: tell her to support justice for Clarence Moses-EL. We’ll share your names and comments with the AG Coffman’s office, the press and Clarence’s legal defense team as they fight for his just compensation.

Thanks for taking timely action. This may be about politics for Cynthia Coffman, but it’s not for us. This is about justice for a man who has been denied justice for almost 30 years. Clarence Moses-EL deserves better, and we all deserve a system that works to protect the innocent.