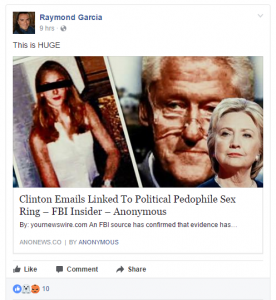 Two 2016 GOP candidates, known for posting false and inflammatory information on Facebook, are running again in 2018.

Raymond Garcia landed in The Denver Post in 2016 after he posted a Facebook item promoting a “Hillary Meal Deal, 2 fat thighs, 2 small breasts, and a bunch of left wings.”

Garcia was soundly defeated by State Rep. Susan Lontine of Denver, but he’s moved and is now challengi 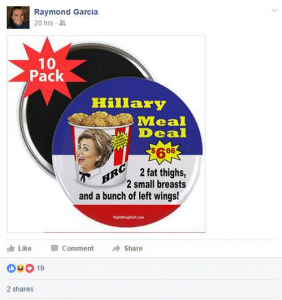 Among numerous posts on Facebook, he once wrote, “OMG! This is perfect” above a fake photo of Trump attacking Hillary Clinton.

And he shared what turned out to be a deadly fake news item about the Clintons running a pedophile sex ring from a pizza joint. Still, Republicans in Colorado embrace Garcia.

The candidate isn’t worried about turning voters away with his Facebook posts.

“The only time I have anything controversial on Facebook is when I’m going against a liberal. And any time I post something like that, it’s in response to something liberals have posted.

Garcia said he doesn’t understand how liberals can be so offended by what he posts and then get so upset by his responses, which, he says, are not as extreme as those of liberals. 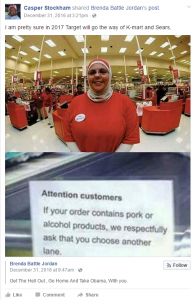 Among other extreme and inaccurate information he’s spread on Facebook, Stockham once posted fake news depicting a Target cashier dressed in a burka, with a sign in front of her stating, “Attention customers, if you order contains pork or alcohol products, we respectfully as that you you use another lane.”

“DeGette posts some things that are inaccurate as well,” he said without specifying what. “I’m more accurate with a staff of one than she is with a million-dollar budget.

“I trying to illuminate the truth as I see it. I don’t think anyone on this planet is perfect, but I do the best I can.”

Stockham says he encourages his Facebook connections to be honest on Facebook and to be kind to one another.

Stockham has posted false information about liberals leaving their trash on the ground after an Earth Day party, and he calls professional media fake.

Garcia got a “Mr. Congeniality” award for his offensive, inaccurate, and gross posts.

Stockham got the “Who the Fuck Cares about the Facts” award, after posting fake news even though he stated it “probably wasn’t true.” 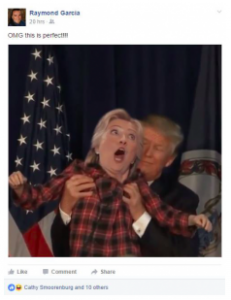