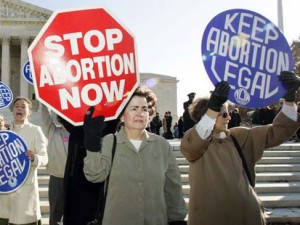 Directors of 18 progressive organizations called on Democrats yesterday not to welcome or accommodate anti-choice policy makers in their party.

“Rather than accommodate policy-makers who will support the very same attacks on women that we spend so much time fighting, we must protect access to abortion as a reproductive right contained in the Democratic Party Platform,” wrote directors of ProgressNow and other organizations in a letter to the Democratic National Committee. “Lip service won’t suffice.”

“Women deserve an unwavering commitment to securing reproductive autonomy for all, regardless of income level or geography, so that every person in our nation has the right to decide if, when and how to start a family,” the letter continued. “It’s not just the right thing to do, it is our responsibility as progressives.”

ProgressNow Colorado Director Ian Silverii signed the letter, along with leaders of ProgressNow and other organizations in Florida, Georgia, Michigan, New Mexico, Texas, and elsewhere.

“This confirms an ideological purge on the left, a new litmus test of sorts, that if you don’t aggressively participate in legalized child-killing, they say you are not a true Democrat,” said Klingenschmitt, who’s considering another run for a state house seat this year. “This shocking internal memo by party leaders, apparently shunning pro-life Democrats from any possible nomination to any leadership position in the future, confirms what I’ve said for years, that NO Catholic or Evangelical can EVER vote Democrat again, lest they support or join that party’s intrinsic (and now mandatory) bloodlust.  The party of child sacrifice reminds me of Psalm 106:38, ‘They shed innocent blood, the blood of their sons and daughters, whom they sacrificed to the idols of Canaan, and the land was desecrated by their blood.'”

Only six Democrats in Congress have positions that could be defined as anti-choice. In the House, they are Rep. Dan Lipinski of Illinois, Rep. Collin Peterson of Minnesota, and Rep. Henry Cuellar of Texas.

In an interview with the Hill last year, Ben Ray Lujan (D-N.M.), who’s charged by congressional Democrats with electing Democrats to Congress, said anti-abortion Democrats will not be shunned.

“We’ll need a broad coalition” to win back the majority, Lujan told The Hill. “We have to be a big family in order to win the House back.”

The platform for the Democratic Party has become stronger on abortion issues, with the 2016 platform for the first time opposing the Hyde Amendment, which bans the use of federal tax dollars to perform abortions.

“As progressives, it isn’t enough for us just to oppose Republican policies or promote reproductive rights when we are directly under attack,” states the letter from progressives released yesterday. “We must stand for a vision that speaks to fundamental values of autonomy, equity, liberty and self-determination and fight for an America where people can access the medical care they deserve based on their own judgment, including abortions. Trusting and equipping women to regulate their own reproductive lives is fundamental to achieving the kind of gender, race and economic equity that the Democratic Party articulates as its key values.”