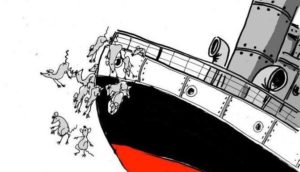 Democrats need to capture 24 seats in 2018 to re-take control of the House of Representatives. With the news today that California Rep. Darrell Issa will retire in 2018 rather than seek re-election, there are now 32 incumbent Republican Members of Congress who are walking away from office after this year.

Veteran Republicans — especially those in potentially competitive seats — are opting to head for the exits rather than remain in a Congress where, if the GOP retains control this November, they would be positioned to continue to wield considerable influence.

Issa and [Ed] Royce joins Rep. Ileana Ros-Lehtinen of Florida and Dave Reichert of Washington as Republican House members abandoning House seats Clinton won in 2016. There’s also a handful of other seats — Charlie Dent’s in Pennsylvania, Dave Trott’s in Michigan, Frank LoBiondo’s in New Jersey — where Trump won but the underlying political realities of the districts suggest Democrats will make a major play to win them this fall.

In each of those cases, the retiring members are simply walking away from Congress. They aren’t running for another higher office. They aren’t leaving to enter the Trump administration. They don’t have cushy, high-paying jobs lined up. They are just leaving.

The average seat loss for a President’s party in his first mid-term election is 23 seats…but since 1962 that number jumps to 40 for a President with an approval rating below 50%. Issa and other Republican incumbents seem to be making the determination that they would rather leave office on their own terms than face losing their seats in what is increasingly looking like a Democratic wave in 2018.