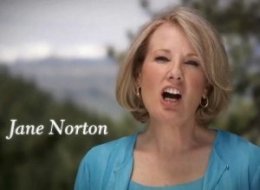 One of the many hires by the Trump administration from the ranks of Colorado Republicans was former Lt. Gov. Jane Norton, the failed 2010 U.S. Senate candidate and longtime “culture warrior” representing the state’s powerful religious right faction of the GOP–from her bio as the Department of Health and Human Services’ Director of the Office of Intergovernmental and External Affairs:

Jane Norton serves as Director of the Office of Intergovernmental and External Affairs for the U.S. Department of Health and Human Services (HHS). Jane and her team serve as the primary point of contact with state, local, and tribal governments, as well as with the many individuals, companies, trade associations, nonprofits, and faith-based organizations who have an interest or involvement with the mission or work of HHS.

Jane’s background includes public service in both elected and appointed positions. At the state level, she was elected to serve as Colorado’s Lieutenant Governor from 2003 to 2007. During that time, her fellow Lt Governors elected her to chair the National Lieutenant Governor’s Association. In appointed positions, Jane was tapped by Colorado Governor Bill Owens to lead the state’s Department of Public Health and Environment, and she served in the state legislature. In all of these positions, Jane worked to improve the health and welfare of the people she served.

Part of Norton’s job at HHS, as the Denver Post reported last August, was “improving the health and welfare of Americans” by pushing for the repeal of the Affordable Care Act:

Norton said the Trump administration is “committed as ever to make sure we can repeal and replace.”

“Our senators and representatives are home now, and they are hearing from their constituents that we need to do something, that we have to have relief now,” [Pols emphasis] she told The Denver Post in her first interview with Colorado media since taking her job. “I think we have to.”

First of all, correct us if we’re wrong but we’re pretty sure Colorado Republicans were not hearing from constituents last August that it’s time to repeal Obamacare.

But since that story in early August, two things have happened: the GOP campaign to repeal the Affordable Care Act collapsed in a heap after exhausting every possible legislative gimmick and side-deal with wavering Republicans, and HHS Secretary Tom Price was forced to resign in disgrace after wasteful use of private jets traveling to official yet often-lightweight functions. We haven’t heard to what extent Jane Norton might have been along for the ride on those ill-fated flights, or what Norton has been doing at HHS since Price’s departure.

Until this week, when we found out the answer–Jane Norton has been packing her bags.

Kalavritinos, who’s currently at FDA, replaces JANE NORTON, who only ran the office for seven months.

Latest shake-up means that nearly 40 percent of HHS secretary’s leadership team —including acting secretary Hargan himself — are only interim.

So to recap, two days ago it came out that the former Lt. Gov. of Colorado was being replaced at her high-level position in the Trump administration, less than three months after the resignation of her boss HHS Secretary Tom Price under a cloud.

Do you want to know the rest of the story? Because we do! Stay tuned for updates.