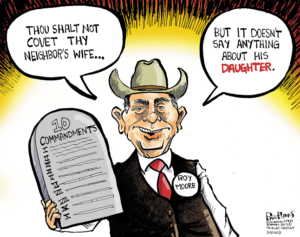 Another eye-opening story from the Denver Post’s Mark Matthews today, this time on the pending Supreme Court case of a Lakewood cake baker trying to get out from his obligations under Colorado civil rights law to serve the public equally–an Alabama organization founded by none other than Roy Moore, the controversial U.S. Senate candidate beset by allegations of sexual molestation of underage girls as a district attorney, is weighing in on the side of…um, morality:

An activist group founded by Alabama Republican Roy Moore is one of several dozen organizations that have submitted briefs with the U.S. Supreme Court ahead of next week’s arguments in the case of a Colorado baker who refused to make a wedding cake for a gay couple.

Moore’s group, called the Foundation for Moral Law, took the side of Lakewood baker Jack Phillips and contended that he shouldn’t be compelled to create a wedding cake for a gay couple because doing so would conflict with his Christian beliefs about marriage.

“In this case, the state of Colorado has sent a ‘message of exclusion’ to Jack Phillips, the owner of Masterpiece Cakeshop: He may not follow his religious beliefs concerning marriage, and, if he does, he will face official censorship and fines that will force him out of business,” wrote John Eidsmoe in a Sept. 6 filing for the Foundation for Moral Law.

According to Matthews, Roy’s wife Kayla Moore is the current president of this organization while Moore himself is listed as “president emeritus.” So it’s definitely what you’d call a family affair–so much so that it was the focus on a Washington Post investigation in October revealing that Moore had personally been paid over $1 million by the foundation in addition to employing his wife, two children, and Moore’s bodyguard.

As conservatives local and across the nation champion Jack Phillips’ “right” to discriminate against LGBT customers, here’s a useful reminder of who is on the team.