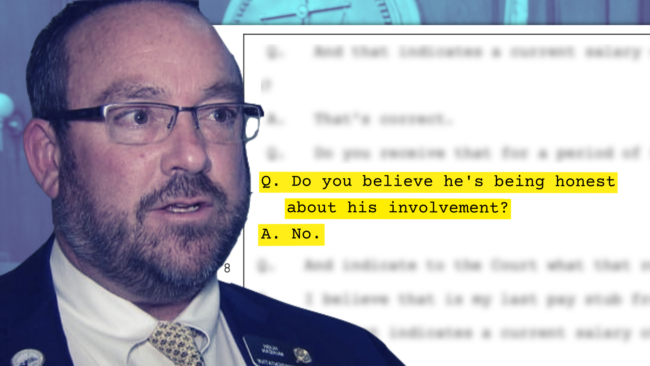 (This article was originally published in the Colorado Times Recorder)

The top Republican in the Colorado House of Representatives worked to conceal his involvement with a political consulting firm from his colleagues in the legislature, according to hundreds of pages of never-before-published sworn testimony. The documents, which stem from Minority Leader Hugh McKean’s divorce proceedings in September 2020, include firsthand testimony from McKean regarding his work with a number of Republican candidates, including at least one primary within his own caucus, his rationale for attempting to keep this work out of the public record for ethical reasons, and the outline of a campaign finance scheme which may violate Colorado law.

The transcripts, amounting to 389 pages of testimony given over the course of two days, provide a rare glimpse inside a political operation which the Minority Leader attempted to hide from his colleagues, and raise significant ethical and legal questions about the nature of the services McKean has provided to clients. All testimony was provided under oath.

The revelations from the court documents are the latest in a string of unusual happenings involving McKean this year. The legislator came under scrutiny in February for apparently being registered to vote at a vacant plot of land after his primary opponent, Austin Hein, filed a complaint against him with the Colorado Secretary of State’s office. The complaint has since been dismissed, and all available evidence suggests McKean is in the process of building a house on the lot.

END_OF_DOCUMENT_TOKEN_TO_BE_REPLACED In late May, Republican Secretary of State candidate Tina Peters’ campaign made a $50,000 payment to PIN Business Network, a marketing company with ties to election conspiracist and podcast host Joe Oltmann. The payment was marked in the state’s campaign finance database as being for “internet advertising,” and amounts to nearly one-third of Peters’ total campaign expenditures to date.

The Peters campaign’s $50,000 payment is the latest, and largest, in a string of payments made to the company by far-right political campaigns. While the payments are notable on account of the company being owned by a man with a fixation on the mass murder of elected officials, they are noteworthy for another reason: PIN Business Network does not specialize in political advertising. According to case studies available on the company’s website, the bulk of PIN’s work appears to have been dedicated to improving the sales volume of car dealerships.

The seeming mismatch between the company’s profile and the services the Peters campaign is ostensibly paying for raises questions about the underlying purpose of the large payment, and about the connection between PIN, Peters, and Joe Oltmann.

Peters, the current Mesa County Clerk & Recorder and frontrunner to be the Republican nominee for Secretary of State, has made headlines over the past year after being found to have allegedly compromised the security of Mesa County’s voting machines while looking for proof of a baseless conspiracy theory alleging that Dominion voting machines stole the 2020 election from Donald Trump. That conspiracy theory was concocted, in part, by Joe Oltmann, former CEO of PIN Business Network.

Oltmann, a far-right influencer based in Douglas County, rose to prominence in the aftermath of the 2020 election when he contributed to the conspiracy theory that machines made by Dominion Voting Systems were responsible for switching votes away from Donald Trump. The claims made him a rising star in the Republican Party, but also earned him a role as a defendant in a multibillion-dollar defamation suit filed by Dominion. Oltmann is also the founder of Colorado-based FEC United, a conservative organization with its own armed militia division, United American Defense Force (UADF), and has made headlines in recent months for repeatedly calling for the mass execution of elected officials. Oltmann has repeatedly contested claims that UADF, which frequently appeared at protests and events in body armor and bear shields, is a militia.